New to it all ? ask here for advice and check out these quick buyers guides
Post Reply
12 posts

My Skarosser has a small capacity leisure battery, I am not convinced it is in the best of condition either. Been fine when I have been moving every day (after I got it to charge from the truck!) but I may be staying put for a few days next couple of times I will be away. Any issues with fitting a battery with more ah capacity? The charging wires seem rather small.
Top

What I did (with same camper) was to remove the small single battery, and substitute it instead with a couple of 100Ah batteries
though it did involve unscrewing and moving the water pump to one side and making the battery compartment a couple of inches deeper & higher,

I didn't change the wiring though and as nothings glowing red-hot since I'm guessing it was a success
Also see; http://truck-campers.uk/
& https://www.pinterest.co.uk/RichardZildjian/
Top

No, if there’s space for it, there shouldn’t be any issue at all with fitting a larger capacity battery.

Dodgy wiring, with dirty or corroded connectors, corroded cables and optimistically-specified, skinny wires are the cause of lots of electrical trouble, especially in older campers. If your battery is struggling, and especially if it doesn’t seem to be charging properly, it may be worth inspecting the wiring and connectors carefully and clearing or replacing anything that looks dirty, green or toasty. As wires and connectors become corroded, their resistance increases so that they may become hot. The heat speeds the corrosion, so they get even hotter and we’re quickly into a vicious cycle that can lead to low system voltage, bad smells, smoke or even a fire.

The current from the alternator to charge the battery (and power the fridge) is quite a lot, and needs thick copper cable and clean connections to carry it efficiently. It’s common to detect a significant voltage drop between the alternator and the supply to the camper battery, enough that the camper’s battery barely charges at all. The 12S connector or 13–pin connector pin carrying this current often gets corroded and dirty, and an unscrupulous auto=electrician or tow bar fitter may well have used a budget, skinny wiring kit that really isn’t up to the job.

Before replacing the battery, it might be worth checking the voltage arriving at the camper battery’s supply from the truck via the 12S or 13-pin connector when the truck engine is running and the camper battery is disconnected. It should be up around 13 volts (ideally 13.8, I think). If it’s below 12V, the wiring needs checking. If it’s been in that state for a while, your camper battery may have not been charged properly for quite some time. This can accelerate its decline or damage it, so if this is the case, it’s probably wise to replace it. Even when kept at a good voltage, lead-acid batteries don’t last for ever. A ‘refresh’ cycle on a fancy plug-in charger may revive it a little temporarily. Topping up the electrolyte if necessary may help, and you can get packets of chemicals to mix up and revitalise the electrolyte, but if any of these things seem necessary, your battery is probably in a terminal decline and you might as well replace it sooner as later and certainly before relying on it for a long, cold winter night. (Fooling around with strongly acidic battery electrolyte is no fun and can ruin your jeans. You can guess how I know this).

If there’s a healthy voltage arriving from the truck’s engine, but your battery just doesn’t last long, then it’s probably just old and tired.

There are other possible, though less probable, explanations. There could be a short circuit somewhere in your camper that’s causing a constant current draw and draining the battery. You can test for this if you have a multimeter; it’s not that uncommon, especially if there’s damp in there somewhere. When everything’s switched off, there should be zero current flow from the camper battery. If there’s any current, something somewhere is drawing that current and shouldn’t be. Old, LED digital clocks and control panels sometimes draw a surprisingly large current all the time so that over weeks without any charging, they’ll drain an ailing battery. Typical faults might be a fine, whiskery strand of copper from a wire waving around inside a light or connector, allowing a constant small current through, or a fuse in a damp, salty environment where the salty moisture allows a constant trickle of current to flow. Tracing the culprit can be tedious, but could save you the cost of replacing a perfectly good battery.
Top

Thanks for the replies. When I got the camper almost a year ago the battery wasn't being charged by the truck and I never thought to check. Over several days use I pretty well flattened it totally. After spending a while cleaning the plug I got a decent voltage on the camper voltmeter with the engine running. What I am a bit concerned about is how low the voltage seems to go with just a light on but I haven't stayed anywhere more than one night so it gets charged ok every day. Could do without buying a battery at the moment though!
Top

Have you swapped your incandescent lamps for LED instead yet
Also see; http://truck-campers.uk/
& https://www.pinterest.co.uk/RichardZildjian/
Top

Wow! Amanda. That's a great reply, I'm pretty handy with most DIY, but struggle with understanding "electricity" even though I've installed: solar, 2x150ah batteries, and all the other 12v upgrades.
Thanks for the easy to understand explanation, much appreciated.

I should look at led bulbs, bulb types and fittings have got a lot more complicated nowadays!
Top

No the bulbs are a direct fit no need to change fittings,
choose a version with either a 'soft' or 'hard light you may prefer to read by,
they give off virtually no heat compared to what you have now and only a fraction of the energy to run, may well be enough to leave your battery alone for now
Also see; http://truck-campers.uk/
& https://www.pinterest.co.uk/RichardZildjian/
Top 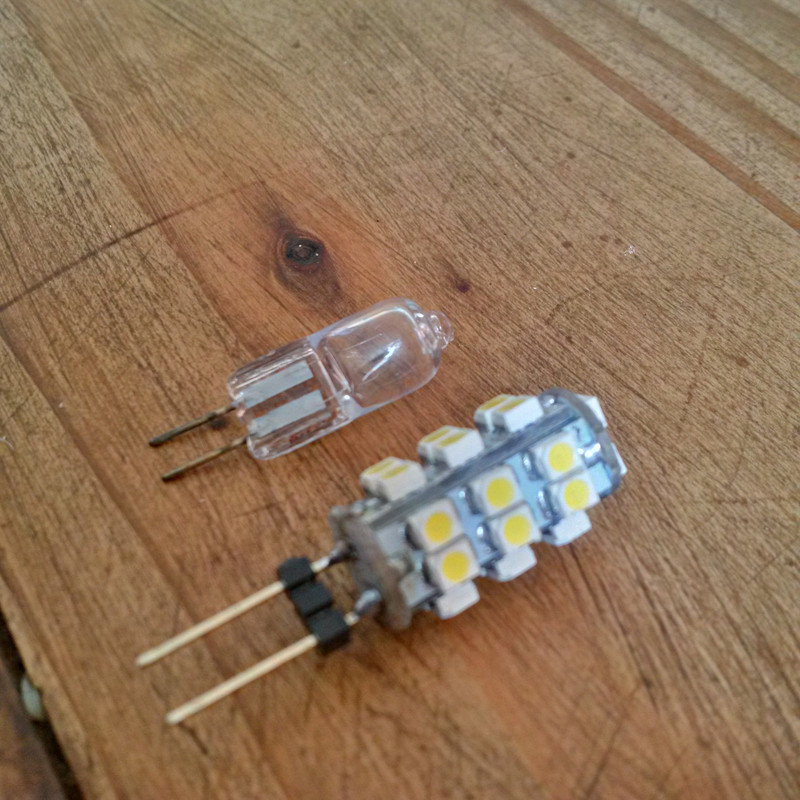 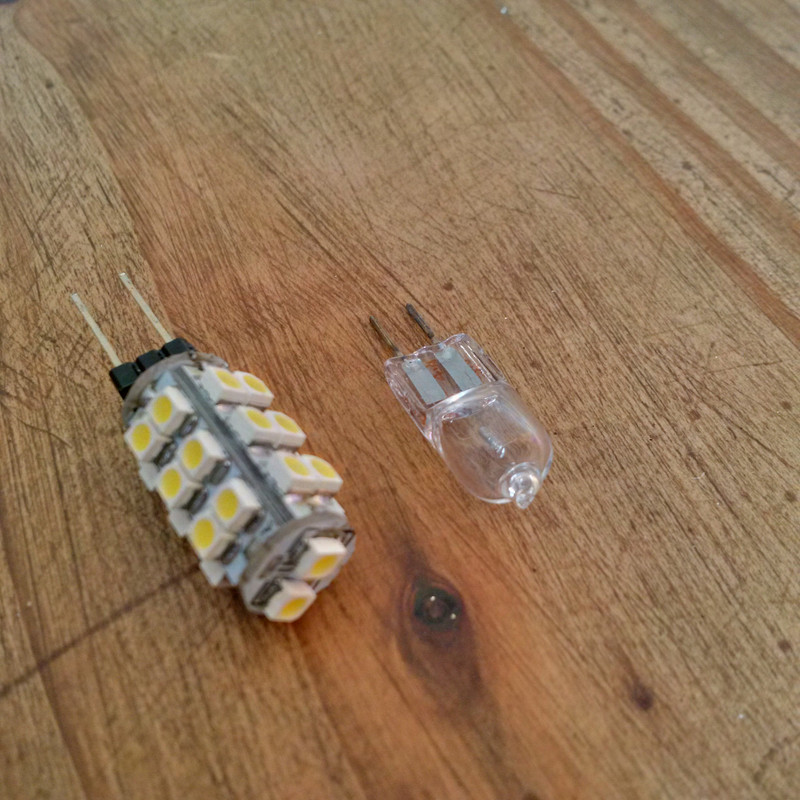 Figured out those ones were G4 and got some thanks, led seems about 20% of the current for (hopefully) similar light. I am of an age when bulbs only came with a bayonet fitting!
Off to Mull for the rally later this week, will be a good test for them. If they seem fine might be tempted to replace the toilet ones, E14 I think.
Top
Post Reply
12 posts