Welcome, how can we help ?
please add your town/camper/vehicle to profile please Ta
Post Reply
9 posts • Page 1 of 1

Hi I live in Cornwall at the moment I own a Daihatsi HiJet with a small Romahome demountable, which we have owned for 2 years. - In 2018 we went Lands End to John O' Groats and did the North Coast 500.
We also went over the 3 highest pieces of public road in Britain so for a little 1300cc truck the HiJet did very well.
It is a small van and even for 2 of us space is very confined, especially when you add on our large lurcher Bertie! - We are considering in autumn 2019 upgrading to a Sun Trekker2 either on a L200 or Mazda or Ford if we can find one at our price.
Jon
Last edited by kernowjon on January 8th, 2019, 6:49 pm, edited 1 time in total.
Top 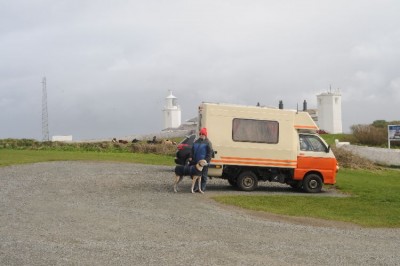 Another picture of the van this time Dunnet Head the most northern point of mainland Britain. 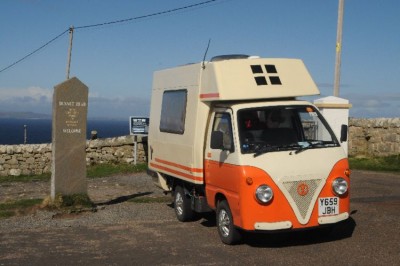 {edited}A tandy pony come on sale in Ireland, another about to drop onto Ebay here in UK as well in fact so you've joined at good time
Also see; http://truck-campers.uk/
& https://www.pinterest.co.uk/RichardZildjian/
Top

kernowjon wrote: We also went over the 3 highest pieces of public road in Britain

Hi Jon & Welcome to the Forum

I would be interested in where these three bit's of road are? Any photo's? 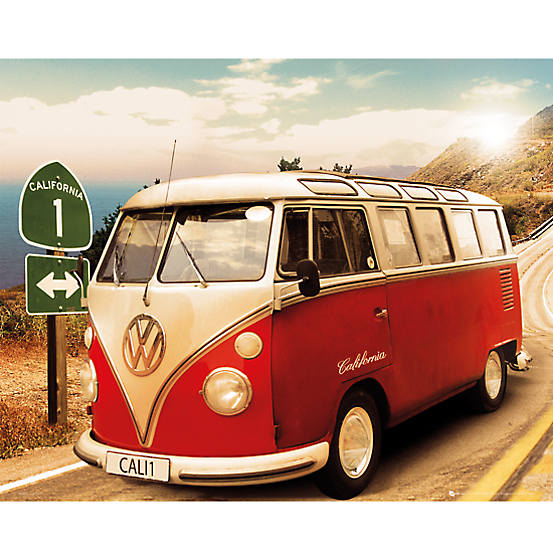 Your set up reminded me of this image. Did you do it yourself or was it like that when you got it?
2005 Mitsubishi L200 Single Cab 4x2
Unknown Demountable
Top

Hallo Jon and welcome to site

Your set up reminded me of this image. Did you do it yourself or was it like that when you got it?

OK - this is the story - it mfalls into 2 strands.
One: we like things that are different - towed a folding caravan from Cornwall to central Scotland and back behind a Spartan Kit car - it looks a bit like a Morgan or an old MG whatever. We have also owned a Mini Scamp and a couple of Jago Jeeps - oh yes and a Dutton Sierra. So that is me and my partner Sandra (I am now &0 she is same ageish). So we are not very well off pensioners.
Two: after a few old camper vans reiddled with rust failed MoTs we decided demountable was the way to go. The first one we looked at was a Walker Sun Trekker, Sandra took one look and said this is rotten. Eventually we agreed go GRP - the little Daihatsu with Romahome pod was available at our price. We also put a lot of work relining it, new window seals, 110amp leisure battery, 100w Solar panel (which adds roof insulation!), 30 litre water.
Now to answer your question Daihatsu HiJets are produced by Paggio in Italy - sold usually as Paggio Porter! In their wisdom they do not produce replacement lights for RHD - after a few years HiJet lights packup - get rusty etc. I had seen pics of VDub look jap Kei vans - often food vans. Following up on one for sale I found a guy Steve Deacon (brother of Queen's Bass player John Deacon) who is a wizard fabricator and sprayer. In under a week he transformed the front of the van and did the paint job! The only bought in bits were the lights and chrome trim strips.

Now to your other question Highest Cairnwell Pass (670m) next same road The Lecht https://www.visitscotland.com/blog/scot ... nic-route/

Then at the end of the North Coast 500 (going anti clockwise - which in my opinion is the best way to go after Applecross there is the third highest but as you go sea level to sea level it is a bigger more adventurous climb Bealach-Na-Ba https://www.visitscotland.com/see-do/to ... coast-500/

We went in mid April through into May before the tourist season and it was fantastic - some things closed because the season has not started but who cares. And this pair of old crusties only used a campsite once! We operated on the maxim - "Keep the fuel and water tanks full at every opportunity and the loo empty"