I need 2 more sheets of PVC but the shower/toilet door will be taped up and fitted as shown in the pictures.
I can open it and walk around it to access the cubicle so I'm happy

( well I will be with the PVC 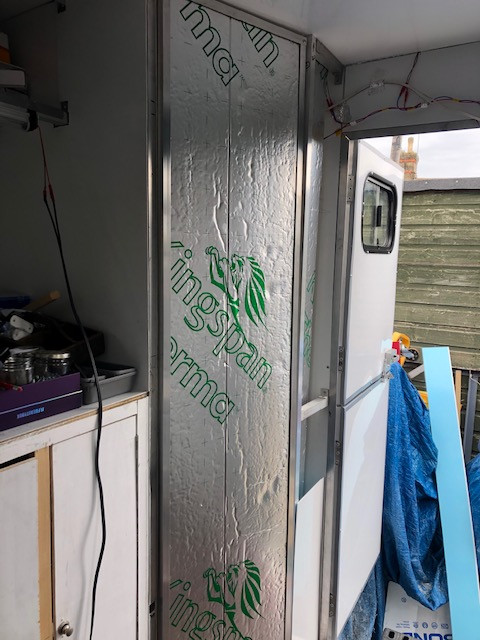 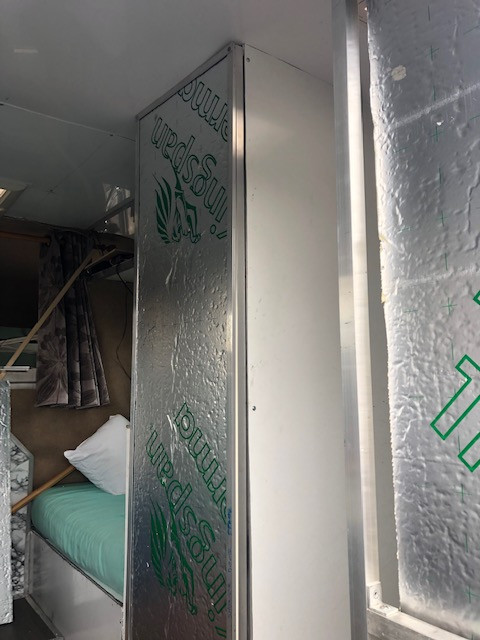 At last, the awning fabric has arrived

Ive got the piping and the awning rail. Just got to learn how to do it.

Tests on annealing the brass eyelet have a good result although I will need to get the Brasso out before I do it for real. 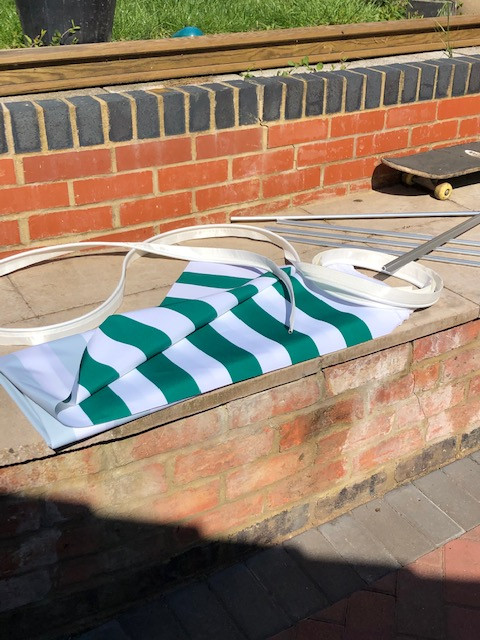 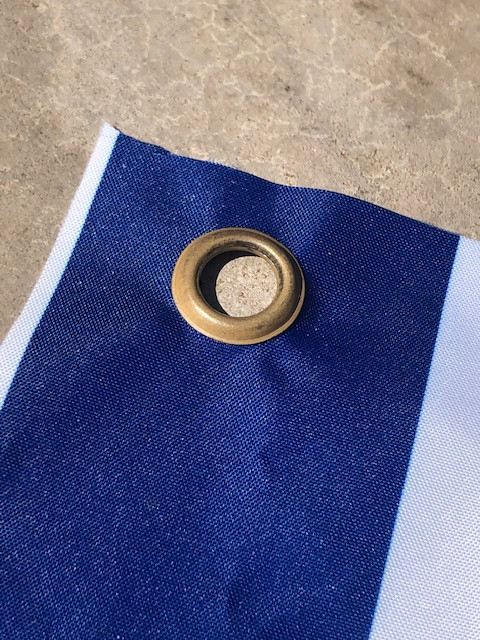 When I've tried to fit those it has never been successful I'll have to watch you see how its done later,

and you know I don't like to pry, but is this wise? 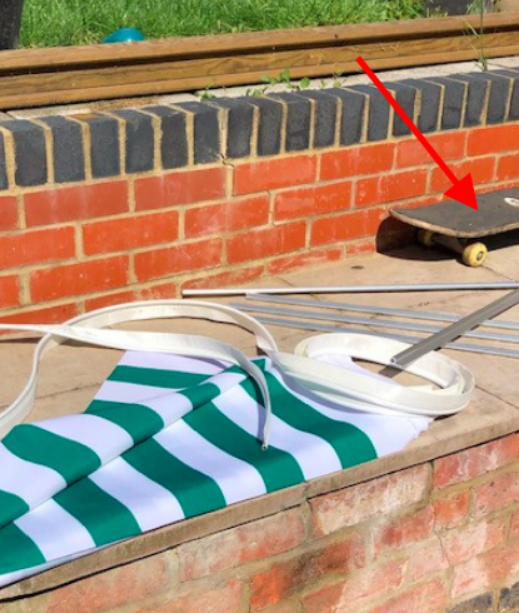 I must admit discretion before valor these days.

I used to enjoy a little go but it's now invaluable when it comes to moving heavy items about. Fence panels, bits of the camper, bags of sand, etc.
Although it does go well on the block paving

never did manage to stand up on this, Knee was the best I could do 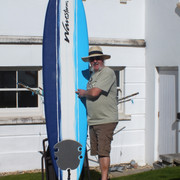 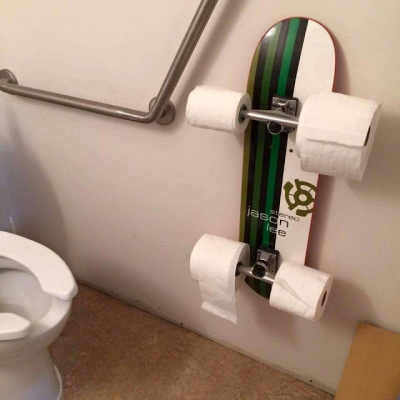 when the skate-board hobby is over

This cold spell has allowed me to concentrate on moving the awning forward.
The material is 1600mm wide and I cut it 3000mm long. I had intended to sew together 2 panels to make it about 3 meters square but trying to machine down the middle of such a large area on the dining room table with a domestic sewing machine proved too much of a challenge. I will settle for 2 panels held together with ball ended bungee straps. This will mean I need grommets, or eyelets, down both joining edges. I have still to get a consistent grommet fitted in my test pieces without it looking like Marty Feldman or splitting one of the brass rings. I am convinced the cheap punch and die are not fit for purpose so I have ordered a different cheap punch and die of a different design along with a bucket load of the two-piece rings to hopefully get it right.
I hemmed the awning on 3 sides leaving the loose end until I decide on just guys ropes or ropes and a terminal rail in a pocket. The awning rail insert, a Keder rail?, was fixed on securely, I hope. 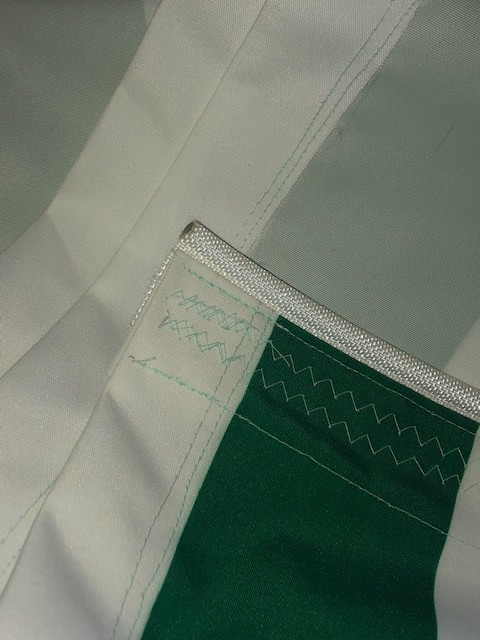 Not the neatest but hopfully adequate.

I have had the thought that the single sheets, should they not be needed as an awning, might make a nice windbreak so a pocket might be good to use to put the poles in? I will see when I get there.

To fix the awning to the camper I have 8mm aluminium awning rail. It only comes in 1-meter lengths so three were fixed to the left side. I had to refer back to the cad design to know where the spars were for fixing. I could only get 2 screws in each rail and those tended to be all up one end. They will end up being the belt and braces as I think I will glue the rails on with Sikaflex 512 when I am sure they are in the required position. 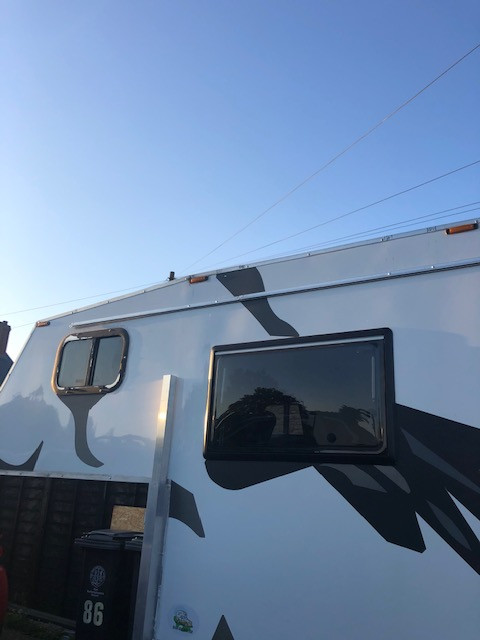 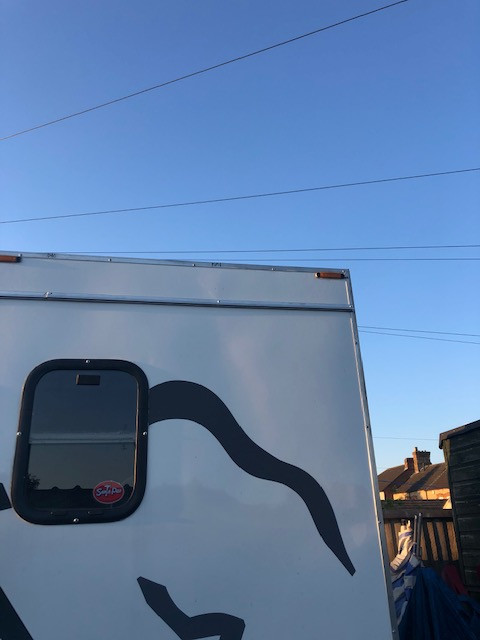 With the camper being a little less than 3 meters away from the fence I was able to judge the overall effect by putting the sheets in position and clamping them to the fence. 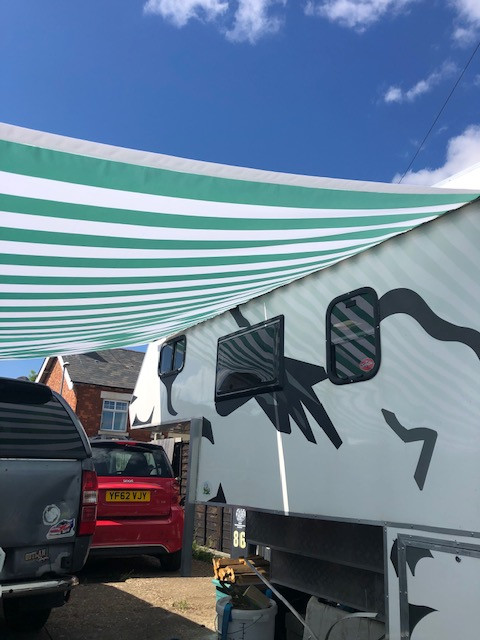 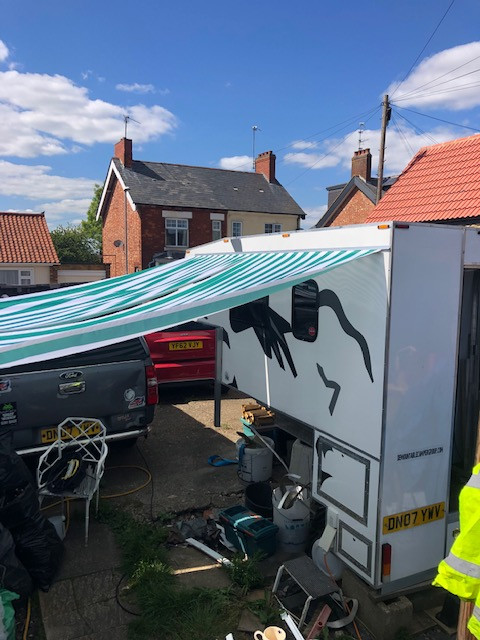 When my new grommets and setting tools arrive I will need to check hole centers for the bungee ball length availability, although most stretch twice their original length so I should have a little leeway. I did wonder whether a 140mm overlap would give me a watertight seam and if I will need a cover strip for the join.
Again, trial and error to find out.

I intend to put a section of awning rail over the back door but a relatively sharp-cornered door slitting a baggy awning is a distinct possibility.

With the warmer weather looking to return I could be back on cutting and fitting angle. I have already put angle on the insides of the rear doors only to find that they now bind on closing. More remeadial work

that entails moving all the door frame back into the camper about 4mm.

I found those bungee's in Chandlery, think I bought some about 4 or 6" long maybe they come in longer lengths 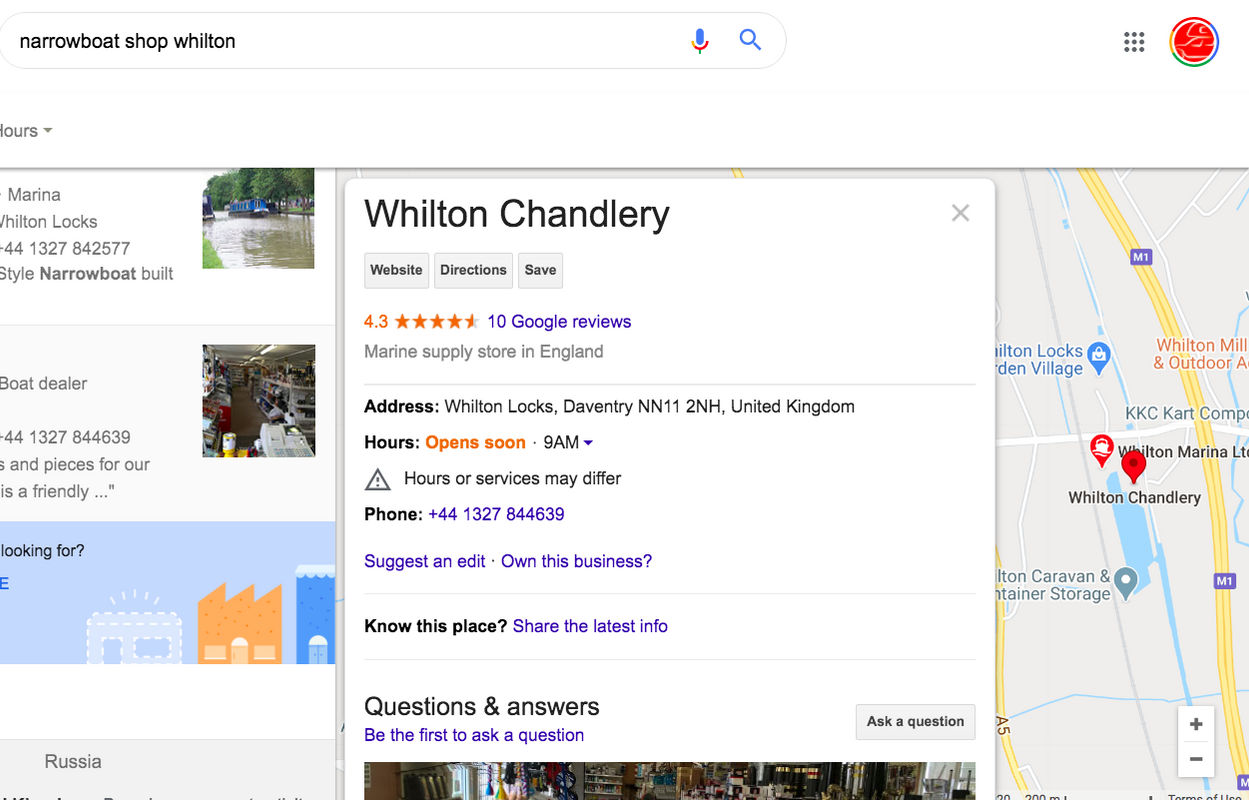 I was looking at the first page of the thread and it is dated 6th June 2017, so next week I will have been building for 3 years

Not something to be particularly proud of other than,
"Success consists of going from failure to failure without loss of enthusiasm" .......(Winston Churchill)
The design work started about 12 months before that.

Well back to more progress.

The fine weather has prompted more outside work. 2, 1-meter sections of awning rail were fitted to the back for an over door awning while the 3 side pieces were glued and screwed in position. I used Gorilla grab adhesive as the 512 was too hard and out of date.
Quite a lot of the new aluminium box and angle was cut up to ready for use. 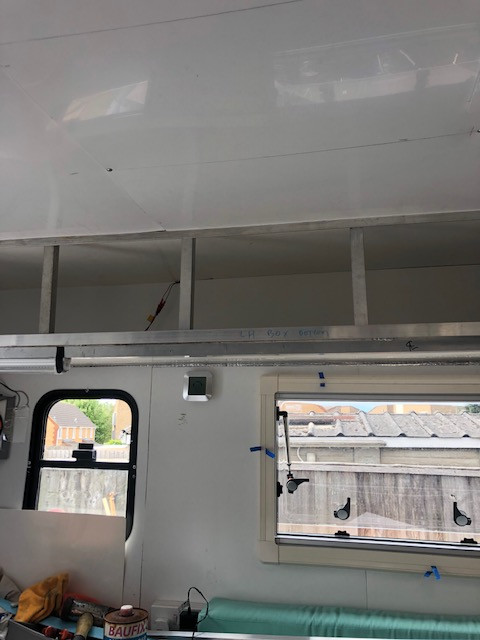 The back of the cupboard lined and the separation spars stood in position for individual cupboards. I am still undecided whether to fit tambour type doors.

In some of the previous pictures you can see the toilet door opens to shield the view of the toilet from the seating area. (My father told me a door opening should always shield the room) It seemed like a good idea at the time but found it a little impractical so I reversed the door to open the other way. I like it this way better. 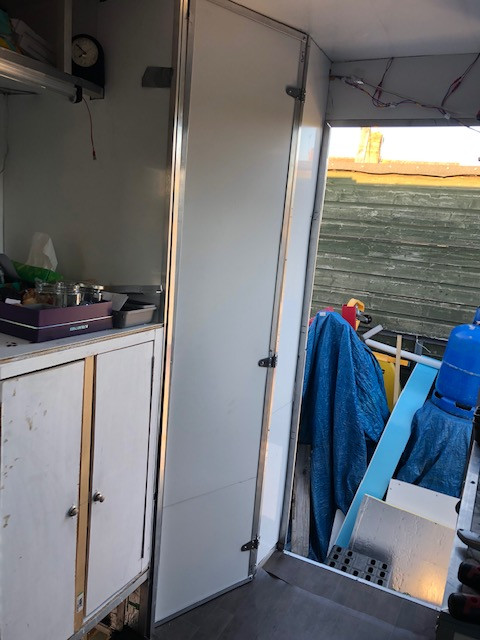 I had reduced the design width of the door to minimize the swing radius. This then left a small section of wall by the back door. With it all in place I was very happy with the overall effect. The slight reduction in the toilet booth width and the shortened door meant that the tunnel effect that is sometimes apparent on some designs was lost. A nice clear view out of the back door from the right hand seats. 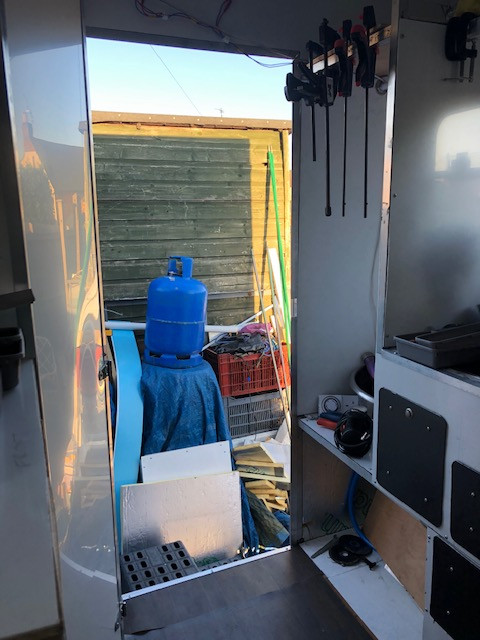 Shame about the view though

The small section of the wall has been strengthened to enable a grab handle to be fitted in the doorway to aid entry. It is also wide enough to be able to fit a Chinese all in one diesel heater behind and bracing to allow it to be boxed in. (should it need to be a shower room too)

Still loads to do, but it keeps me off the streets,