Zildjian,
it's fine in the wind now.

I've dropped it down so the back section is only a foot off the ground to enable me to get in and out easily to work on the inside.

I will lose access to the small storage compartments in the rear skirt if I fix the floor in place so I need to make some doors for outside access. It will make piping up the hob and external gas point easier. I managed to bend an all in one length of 8mm pipe (roughly) from the gas box (mid right) to the gas outlet (bottom left) . The small storage box containing the mains in socket and the gas out connector will also contain a 3 tap shut off valve. One pipe to the gas out socket, one pipe to the hob with a spare in case I go for an instant hot water heater. Another gas drop out too

Working in the camper in the afternoon is difficult with low light(cloudy, and it starts to get dark quite early) I could put my lead light in there but sooner or later I will have to rely on battery power alone. I have on order 4 small led strip lights and a dome light that I hope will go some way to solving the problem.
I need to sort where the internal wiring is going anyway before I fit the silver bubble insulation( mind changed again

) the PVC sheet skin then the van carpet. As yet I am undecided as to whether to leave the ceiling white PVC without the van carpet. It would help with light reflection and make it a bit brighter inside but that can wait until I have lights and can see what its like at night time.

The internal wiring will also have to cater for the external marker lights. Seven white on the front, eight ambers on each side and nine red on the back.

I need to drill the wire access holes and fit the lights, seal for leaks all before the inner cladding goes on.
But again its back to inside jobs, outside jobs, energy levels

Well it is nearly christmas.

Keep it all going, it makes a Great read and will be superb once finished. I get the feeling that you will be still planning/making changes even after you do finish.

Since you started this thread/build i have made a few, albeit they minor, upgrades & repairs to my ageing De-mountable. Too be honest, spurred on by you.

I'am hoping that there will be a Social in June 2019 up North & that you will be able to attend, i'm really looking forward to seeing the final result.

Thanks, Mike, I am looking forward to seeing what it turns out like Too

Your right in thinking it will never be finished, there is always something to alter, modify or repair but that's me, once an engineer always an engineer
I hope to make the get-together and look forward to putting faces to all the names. With my memory, I probably won't remember them so as with my build thread I might take photo's

Side note
I an eager to get it ready enough for weekends out as I am still in contact with a few of the teardroppers and they too want to meet up to see a demountable close-up. I might get a few converts

They are a more gregarious group and tend to meet up at various car/music festivals most months if not on a weekly basis in the summer. I am hoping to spectate at a few of my friend's favorite sports that they participate in. Being a bit of a petrol head, watch/marshal at a car rally(even been offered an MX5 to have a go but we will see), watch motocross, watch Classic racing motorcycles and or course Drag racing. A couple of weeks back I did go to the very last race session at the Rockingham Motor Speedway.

Such a shame to think they will probably bulldoze the 74,000 seat stands down to turn it into car storage site. Last year it was Shakespear County Raceway (drag strip destined to become a housing estate

Even the Bloodhound SSC project looks to being sold off to pay creditors.

When the weather has allowed, I have continued to replace the self-tapping screws with rivets while gluing down and applying sealer to the angle aluminium over the corners. I am still struggling with the rivet gun. My hand clench power is failing and now it sometimes takes two hands to close and "pop" the rivets. Not always easy when balancing on top of a ladder.
I decided on 7 marker lights on the front section so went about drilling the wiring holes. The lights are glued to the camper surface with the wires going through large enough holes to allow a bullet connector to pass through. These connectors will fit into a wiring loom in trunking inside. In buying cheaper marker lights I wanted to be able to replace them should I have a failed unit. 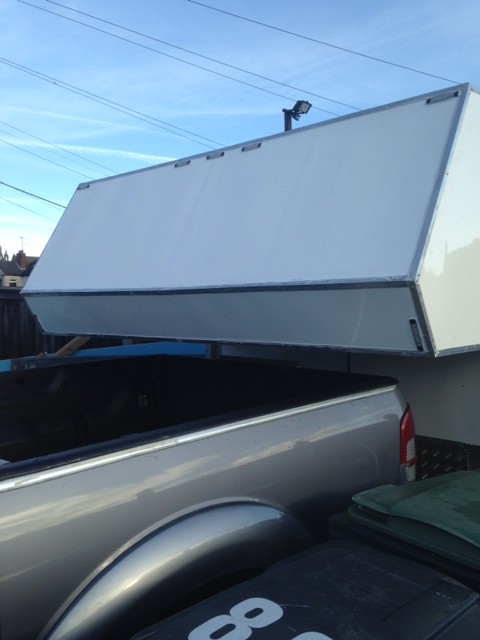 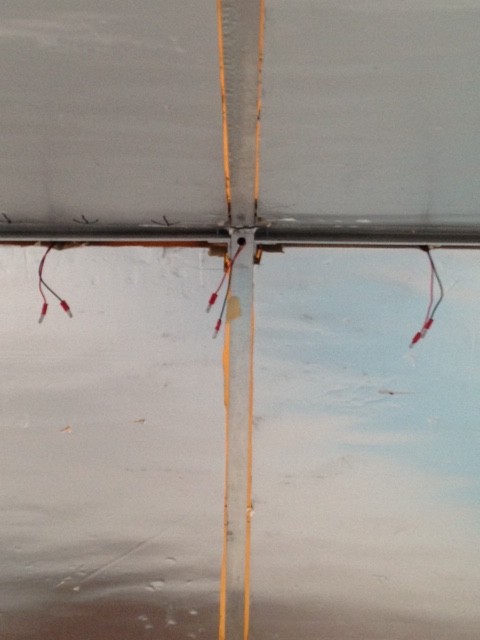 After the next torrential downpour I found that all my waterproofing had been successful but after drilling 7 wiring holes 2 of them leaked. The lights had been stuck on with 512 adhesive and I thought I had put enough on to seal them,

but obviously not. The next dry session was silicone sealing around all the lights. They seem ok now as we have had plenty of rain to test them out.
In an earlier post, I said I would put up pictures of the bed fixings. Well this shows the fixings and the rain I have had 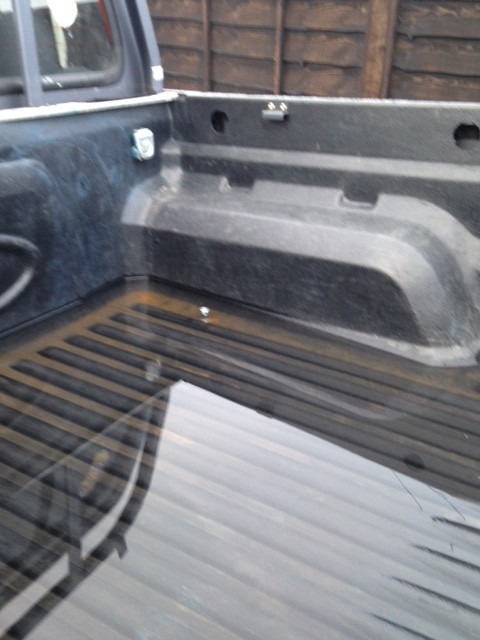 These extension nuts allow me to use a bolt to fix the camper to the truck, all inside so no one can undo it without access to the inside 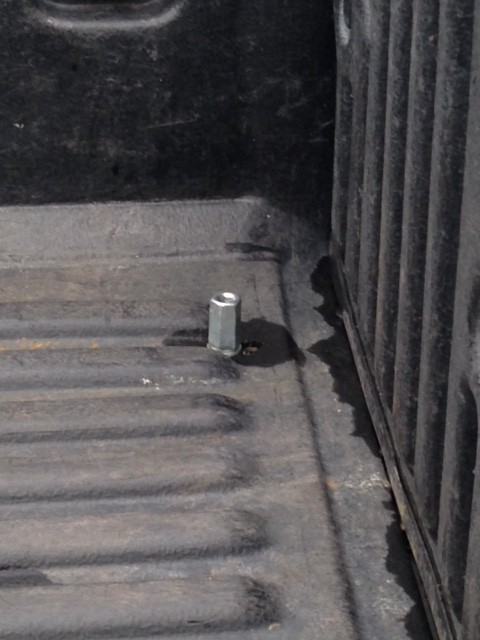 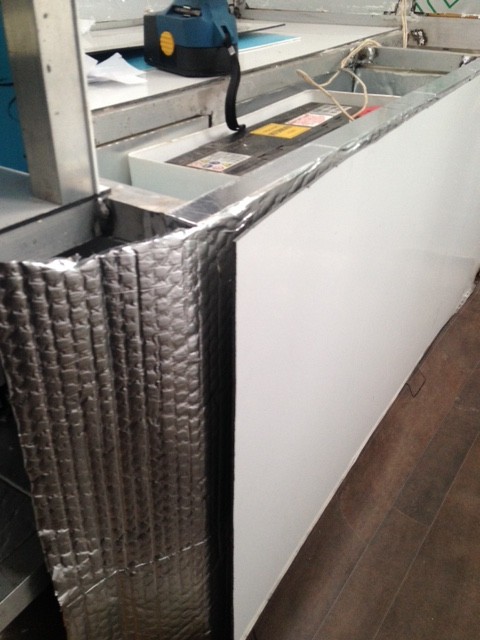 I am still experiencing a cold bridge on the aluminium box section because some mornings there is either condensation droplet or ice on the inside. With this in mind, I decided to go with the bubble insulation and not rely on just the PVC or Dibond sheet. I had a little test run using a tubular 15-watt mains greenhouse heater overnight to see if that cut out the condensation. It reduced it a little I think and I could see the Heat bridge effect showing on the outside surface. I will try it again when the insulation is complete and I have covers on the clamp access holes

The bedding storage area is having the same treatment. When the inner PVC skin is glued in and the corners treated with a silicone sealant I should be able to keep that dry. 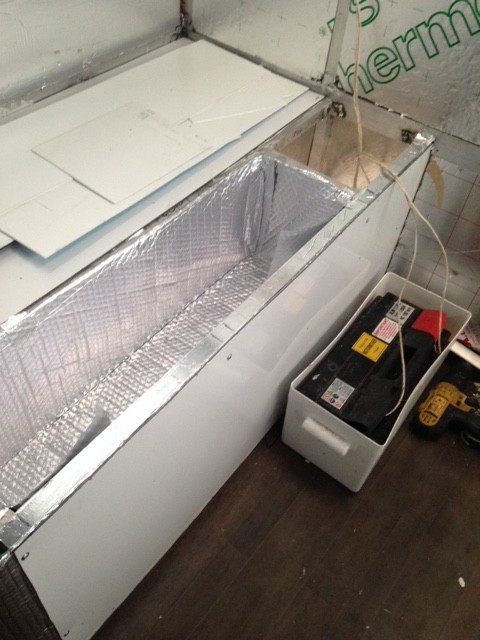 The hole at the front is access to the bed clamp and bolt.

Ps Side note. Looks like bloodhound has been brought

Can I lend you 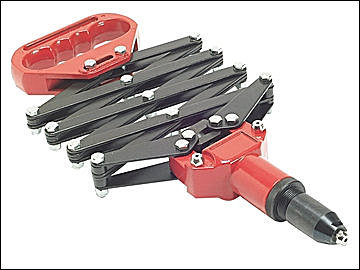 I'm not a fan of the normal rivet gun, especially if you have a lot to do,
I could drop it over today
Also see; http://truck-campers.uk/
& https://www.pinterest.co.uk/RichardZildjian/
Top

That looks just the job.
I'm doing quite a bit of running about this morning. Doing the pre-Christmas runs. I will be near at some stage this morning but if you want to come and have a look see while you're at it I should be clear this afternoon. If not I could call in but I'm not sure at what time I will be there. I'll give you a call later when I have some idea of time.
"Success consists of going from failure to failure without loss of enthusiasm" .......(Winston Churchill)

Sure I'll get it out ready no problem

Cheers Zildjian, tested a couple of rivets.....sooooo much easier

I need one of those

Merry Christmas to all
"Success consists of going from failure to failure without loss of enthusiasm" .......(Winston Churchill)

Good, and you'll be delighted to learn I bolted that Nudge bar on Hilux

Pictures?? I bet it looks mean