So, even though it's only a year since I finished building my pop-top camper, now I've been out and bought an old hardside demountable project as well. What's that all about?!

Well, Clare and I knew that the biggest shortcoming of my pop-top design (and the thing we'd struggle with most) was the lack of a permanent bed. And we were right. The pop-top has loads of virtues and works well and, for a couple of weeks or so, making up the bed each night is perfectly OK. But, much longer than a fortnight and the novelty wears seriously thin and so I had started to wonder about building another camper - but a hardside with a conventional over-cab bed. Just as I did with the pop-top, I took to SketchUp to begin with and started playing around with ideas for the shape and construction of the shell. 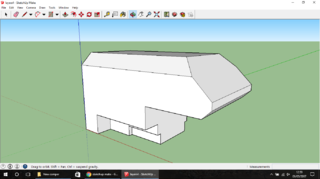 But, at the same time, I was looking around at what was on the second-hand market to see if anything came up which would provide me with the basis of a new build. I checked out a couple that came up for sale but, in each case, the negatives outweighed the positives but then Wilco Lensen (http://www.cellulepickup.fr) got in an elderly Dutch-built Rhino Safari Xtra which seemed to us to offer some of what we were looking for. 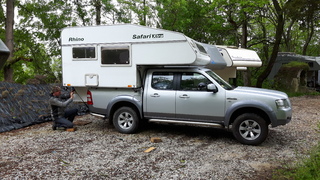 First and foremost it's a good size. With a floor length of just 215cms it sits and rides very well on our double-cab pickup but, just as important, without the wrap-around rear wall favoured in many newer campers, it would fit and ride even better on an extended cab model. That potential is a definite plus for us because we would certainly choose to go back to an extended cab if and when we need to change the pickup. It's also pretty light. I haven't got round to weighing it yet (and I shall certainly be adding weight to it as I increase its battery, water and gas capacities) but, in its present state, you can see that it has a negligible impact on the pickup's standard rear suspension. It stands perfectly level and on the 500kms drive back from Wilco's place I was hardly aware of the camper being there. 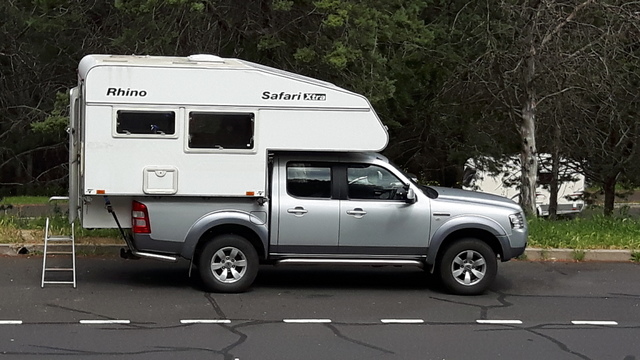 The other good thing about the size is that I think 215cms must be about the shortest floor length that will accommodate a dedicated toilet/washroom. Bizarrely in this one it was either never fitted or it's been removed so it's really just a big empty cupboard!

Incidentally that square-section tube running up in the corner of the washroom is matched by one in each of the other corners of the camper. 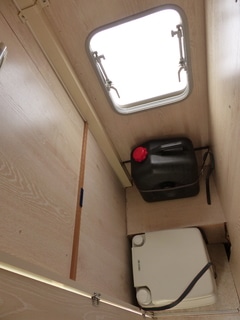 The jacks disappear up into them once the camper's on the pickup - a nice touch. 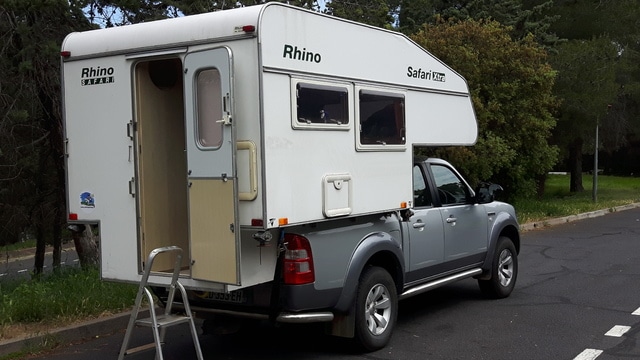 When I get cracking on the rebuilding of it it's my intention to change the layout substantially but, as it stands, it has a fairly conventional forward dinette/side kitchen floorplan. 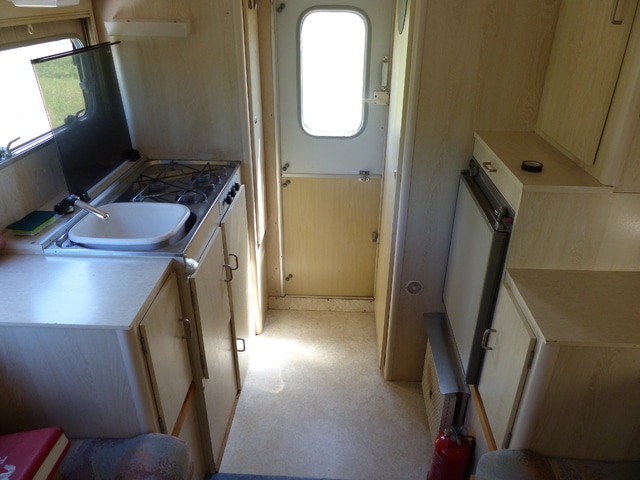 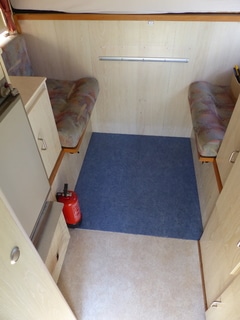 But, rather like the empty washroom, previous owner/s have made some very odd choices and modifications. The underfloor storage, which originally sat between the dinette seats, has been removed - the blue area of vinyl floor covers where it was. Didn't go to a lot of trouble to match the existing flooring, did they?! I guess they must have been very tall or something but for normal size people it means the seats are now a little high and less comfortable than they would otherwise have been. Other modifications seem to have involved drilling lots of holes, in the walls and the furniture, that no longer serve any purpose. There are thirteen in this small area of wall at the end of the bed for example - can't imagine what they were all for; the mind boggles! 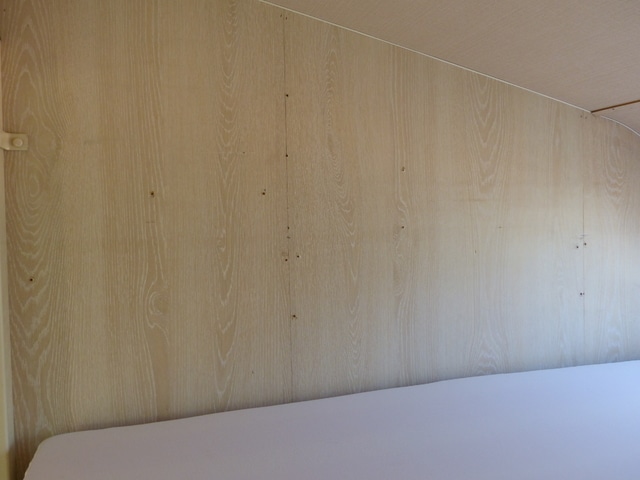 They also have taken a somewhat 'liberal' approach to the wiring. This for example is just asking for trouble! 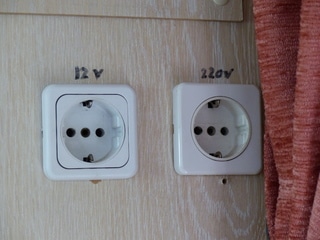 And there seem to be wires all over the shop, heading in all sorts of different directions, none of them clipped properly and mostly unidentified. This includes wiring to no less than seven (!) 230v sockets, two of them outside. So I've spent a day tracking down what goes where and taking out stuff that was dodgy or unnecessary or both but I'm really looking forward to ripping all of that out and starting over.

Was that one had the complicated electronic console fitted
(and can I have it)?
Also see; http://truck-campers.uk/
& https://www.pinterest.co.uk/RichardZildjian/
Top

zildjian wrote:Was that one had the complicated electronic console fitted
(and can I have it)?

No, that's in an old Beka with mirrored ceiling,etc. I suspect Wilco will be lumbered with that for quite a long time

Re: Refurbing the Rhino - A Question About Legs

Not much progress on the Rhino project, mainly because we've been using it pretty much solidly since we bought it back in May. Except for about three weeks in August, when it was much too hot down here to do anything anyway, it's been on the pickup and we've been on the move. But finally towards the end of last month we got back home and got the camper back on its legs. I have a question regarding these which I hope some of you engineering types might be able to answer for me.

I want to service the jacks - they work OK but they are a little rough and crunchy sometimes and I would like to get them working more smoothly. I haven't seen these used on any campers other than these Dutch-built Rhinos and I can't find anything at all about them on the web so I'm a bit stuck. 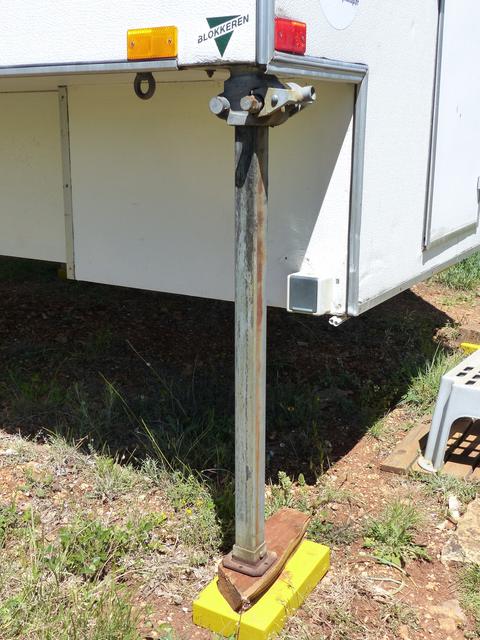 As you can see they're a square section tube which slides away into the body of the camper when they are raised. The mechanism at the top of each leg is pretty simple and basically has just three parts: 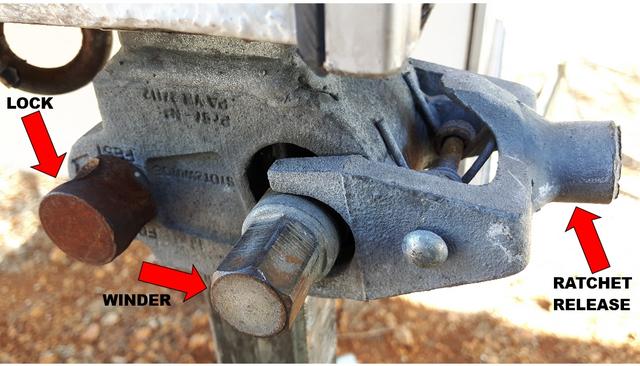 The hexagonal winder raises and lowers the leg - not through any gearing or cogs but just by the direct pressure of its splined shaft aginst the leg. Lifting the ratchet release removes that pressure and enables the leg to slide freely and quickly up and down (which is great and saves hours of winding!). The lock is essentially just a cam which, when turned, forces the winder and leg to hold position.

The face of the leg running against the winder shaft is marked over most of its length with these not-quite-horizontal grooves: 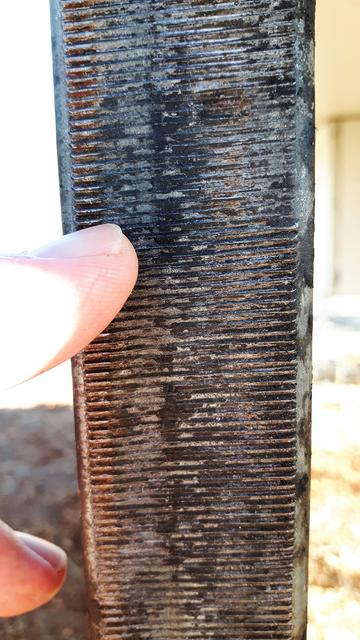 So, my question is this - have those grooves been caused by the action of the winder shaft against the leg over time? In which case, presumably, removing the leg and rotating it by 90 degrees, so that the winder is working on unmarked metal, might produce a smoother action and a longer life for the legs. OR, have the grooves been put there in order to enable the winder shaft to move the leg? In which case, presumably, rotating the leg to a face without the grooves would be a mistake and potentially dangerous.

I'd be grateful to hear your thoughts.
Martin

zildjian wrote:Martin are we talking the horizontal serrations?

Then I think (like a sash cramp I have here for joinery) there will be a corresponding set of serrations on whatever moveable face engages with them when locked
Also see; http://truck-campers.uk/
& https://www.pinterest.co.uk/RichardZildjian/
Top

zildjian wrote:Then I think (like a sash cramp I have here for joinery) there will be a corresponding set of serrations on whatever moveable face engages with them when locked

That'll be the spines on the winder shaft then?
Martin

zildjian wrote:Then I think (like a sash cramp I have here for joinery) there will be a corresponding set of serrations on whatever moveable face engages with them when locked

That'll be the spines on the winder shaft then?

Very positive lock when engaged
but when released, the clamp just slides along the clamp easily or in the case there, the legs store upwards out of the way then clamped in parked position I suppose
Also see; http://truck-campers.uk/
& https://www.pinterest.co.uk/RichardZildjian/
Top
Post Reply
11 posts