If I had it first, you’d know it because I replaced the little water tank with a huge black plastic one. I kept the foot-pedal mechanical pump, though. I also put a big work light on the outside rear wall, which you could switch on from inside, and (and I was very proud of this) I wired it up via a relay so that it came on when you engaged reverse gear, while still being powered from the camper battery, not the pickup battery.

I found this out when, driving along a very dark, twisty winding road one night, the driver behind started flashing his headlights and sounding his horn. I guessed what he was trying to tell me, but it didn’t seem like a good idea to stop on that stretch of road. HE’d seen me, but having induced me to stop, he was quite likely to then pass me and leave me with no rear lights and no way to warn another driver coming up behind. And I wouldn’t be able to see to change the fuse in the dark anyway!

So I continued until we arrived at a set of traffic lights with some street lighting. He pulled up alongside almost apoplectic because I hadn’t stopped sooner, and didn’t seem to understand my reasons for continuing until there were streetlights!

And that prompts the memory that another of the Rascal’s foibles was that the engine was mounted at a jaunty angle under the front seats. If you drove through puddles at any speed, the water splashed up would drip down from the engine covers and begin to pool in the recesses housing the spark plugs. After a few such puddles, one or more of the spark plugs or leads would begin to short through the water, so that that cyclinder didn’t fire. If you could keep going with one cylinder sort-of-sometimes firing, the engine heat would sort it out, but the Rascal didn’t have much power at the best of times, and often it would stall.

The solution was simple: evict your passenger, lift out the passenger-side seat and engine cover, swab out the water from the spark plug recesses, apply a bit of WD40, check it would start and run, then reassemble. But of course the reason you’d be doing all this in the first place was that it was raining, so this didn’t endear you or the rascally Rascal to any friends!

I don’t think many Rascal-mounted Romahome owners ever demounted their campers. I did. It was a rewarding experience. Without the camper, and with no load, sideboards or tailboard, the flat-bed Rascal was amazingly nippy and turned on a sixpence. It was like driving a roller-skate!

I sold it, though, because its single-skin walls made it very cold and damp anytime outside of high summer, and I was beginning to envy the luxuries of some insulation, a fridge, opening windows and maybe a heater. The Suntrekker has all those things, so I’ve stuck with it ever since.
Top

No not the same Romahome - ours was on a 1.3 Daihatsu Hijet. The worst thing about the Hijet are the headlights and yes the tail lights / sidelights run through the same fuse. But the worst in my opinion is that the headlights especially the driver's side are prone to rusting out. Now the version of the Hijet sold in Europe is not manufactured by Daihatsu but by an Italian scooter manufacturer Piaggio and in their wisdom they do not produce or sell replacement headlights for RHD.
My solution was a front end custom job that enhanced the resale value! 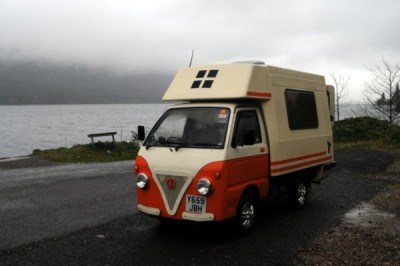 A bit of an update. After talking to Wonkywheel at Whitby and looking at his van I decided to fit a window in the blank wall. I purchased a Shield (Seitz copy) 750mm x 450mm Window. Shortened the kitchen shelf and this is the result.
download/file.php?mode=view&id=7061

I think it is the best compromise getting more light into the camper while not taking away too much of the kitchen area storage - one shelf has had to be reduced in size.
download/file.php?mode=view&id=7062
Jon 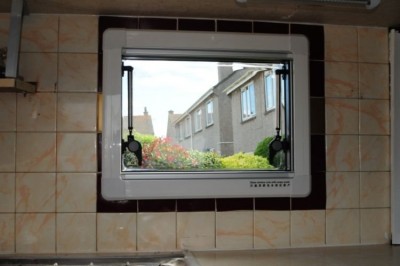 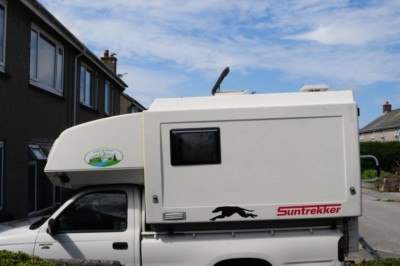 Surprising actually how adding a little more light can dramatically improve an interior plus it also breaks up an exterior and makes them less 'van' looking,
Also see; http://truck-campers.uk/
& https://www.pinterest.co.uk/RichardZildjian/
Top

Looks good Jon.
Thanks for the wiring diagram. You are progressing far more quickly than I am. After being out in the camper for a 3 day birthday weekend, what with loading up and unloading all I have done is looked at it. My initial idea of having everything in the camper ready to go sort of falls by the wayside with event shelter, side panels, fire pit, tables, 4 seater chair and the rest.

A split charge unit will be my next ebay purchase so I WILL get it sorted.
Mark
"Success consists of going from failure to failure without loss of enthusiasm" .......(Winston Churchill)

Return to “Some of our campers”