With the bad weather, and general fatigue at the time, I found I just wanted to sit down. So in some of these resting periods I sat at the dining room table with a selection of PVC offcuts and a few tools and made a couple of wall racks. 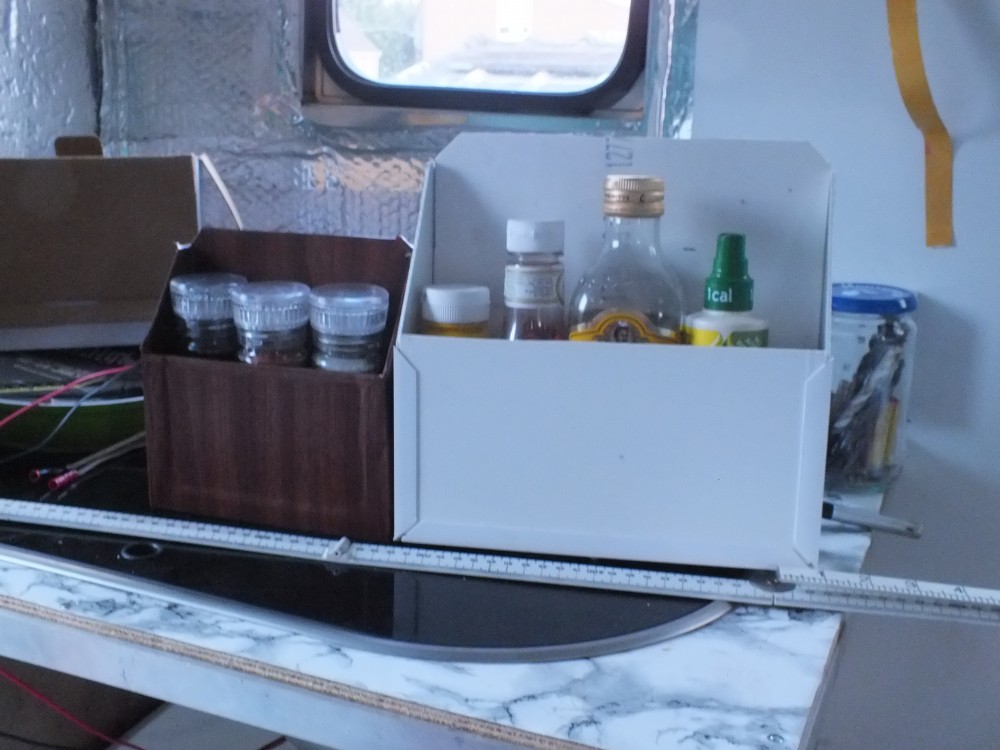 I don't like the dark wood effect stick-on film but the general idea is to have the racks hanging on the wall (when I have a wall) containing cooking condiments. Then when cooking outside on the Cadac the racks can be carried outside and put on the table.
I will have to cut a viewing hole through the front to see what's what but you get the general idea.

By way of helping to see what is actually going on, I purchased a digital volt/ammeter gauge. I'm not sure about the output of the radio but I do recall the 4 speakers are rated at 40 watts each. I found that with the radio at a normal volume (16-18) I was using just over 6 amps. With the volume up full (30) the power went up to about 12 amps 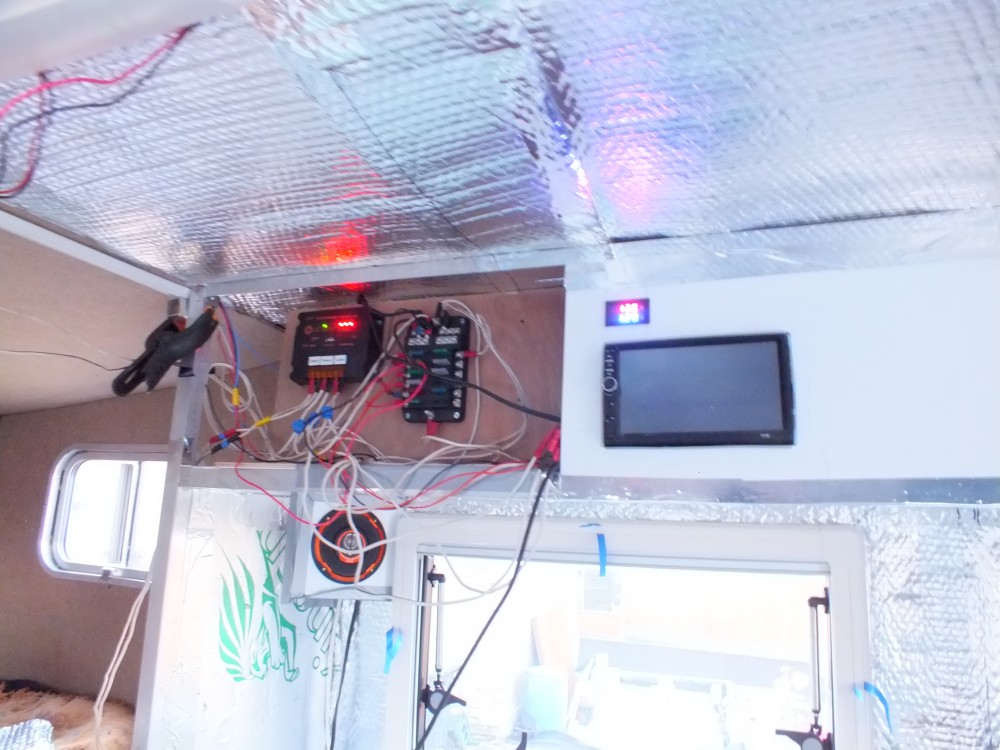 Ignore the mess of wire. I will tidy them up when I am finished running power to the different areas that require power.
I have got a thermometer/ hygrometer coming to add to the array.

The boxes that I used to keep the cooking gear in at the Dragstalgia meeting were all on the overhead shelf and that was a pain to keep lifting up and down to get out. 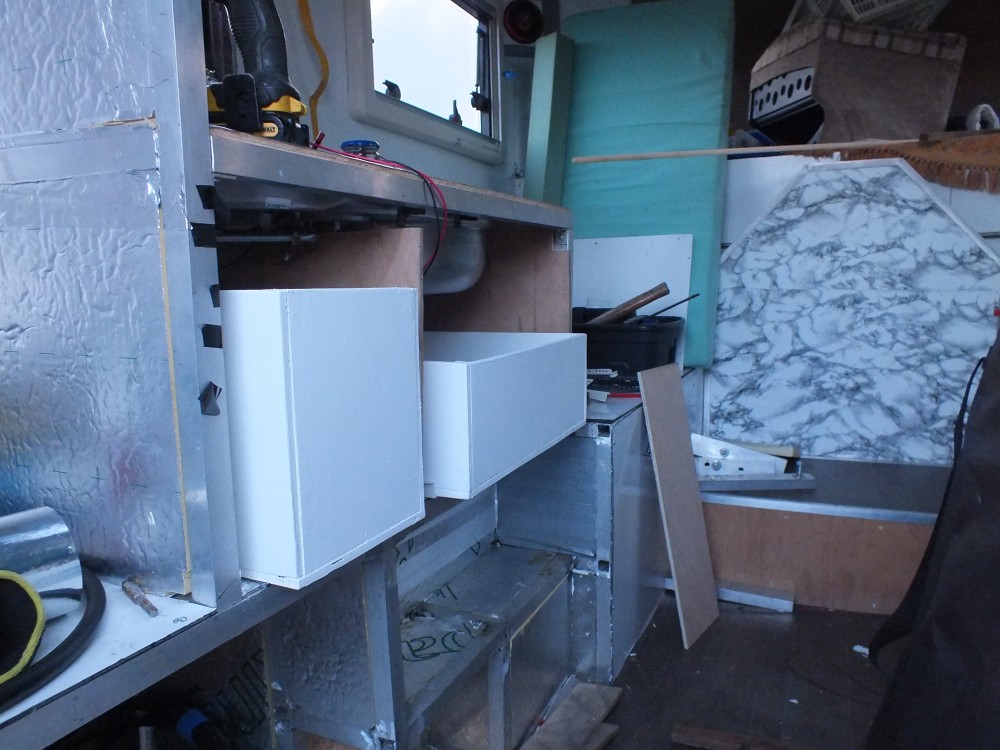 So I need drawers to store them in.
As far as I have got is to make the draw carcass and start to sort sliders to allow almost full access to the contents.
"Success consists of going from failure to failure without loss of enthusiasm" .......(Winston Churchill)

Spurred on by a thread I saw on the facebook sister page about fixing a map to a coffee table. I had long had the idea to stick a UK map of England to the back of my camper and mark the places visited. I had purchased a map, cut the rough outline out ready

I decided to give it a go. Solvite wallpaper adhesive on the back, and slap it on. It will be interesting to see how the rain effects it. My intention is to cover it with clear vinyl wrap but I think it will get a rain test before the wrap arrives 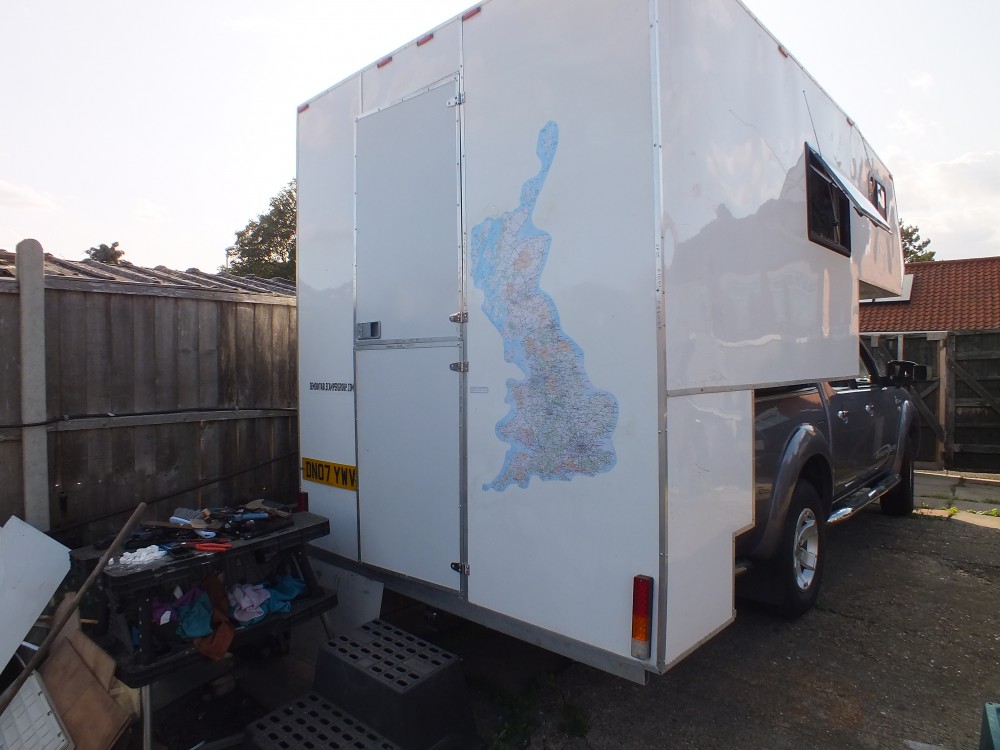 I also put on the Demountablegroup sticker that had been lying around for ages. 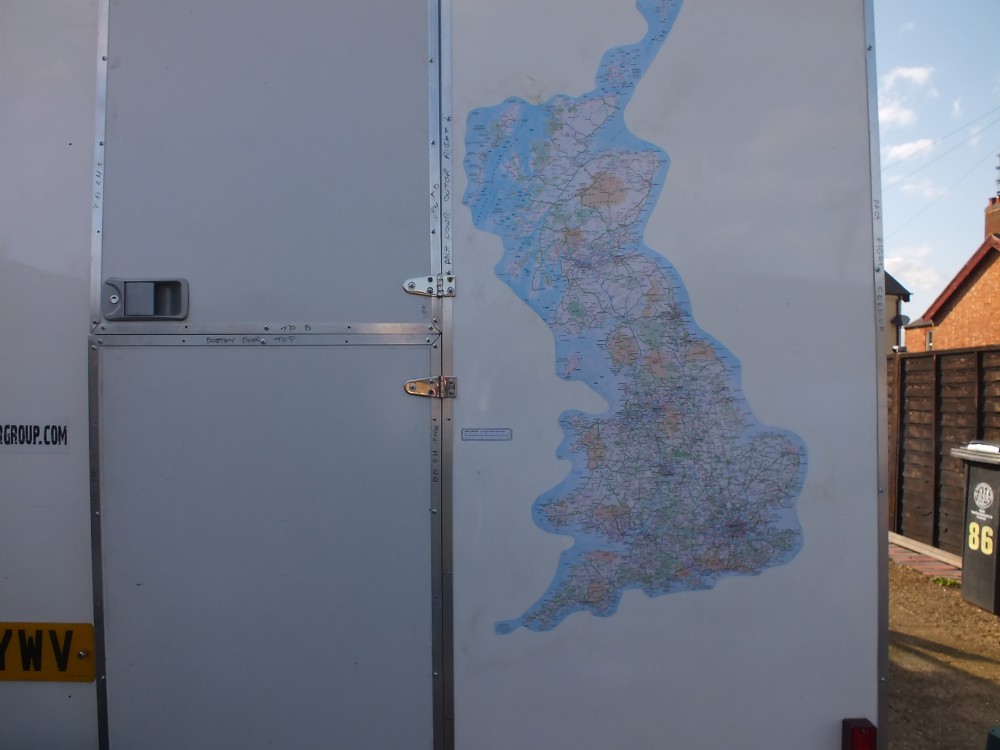 I did a bit more to the control panel

.
I added a hygrometer and a thermostat. The thermostat will be connected to the second roof fan unit ( when it's fitted) 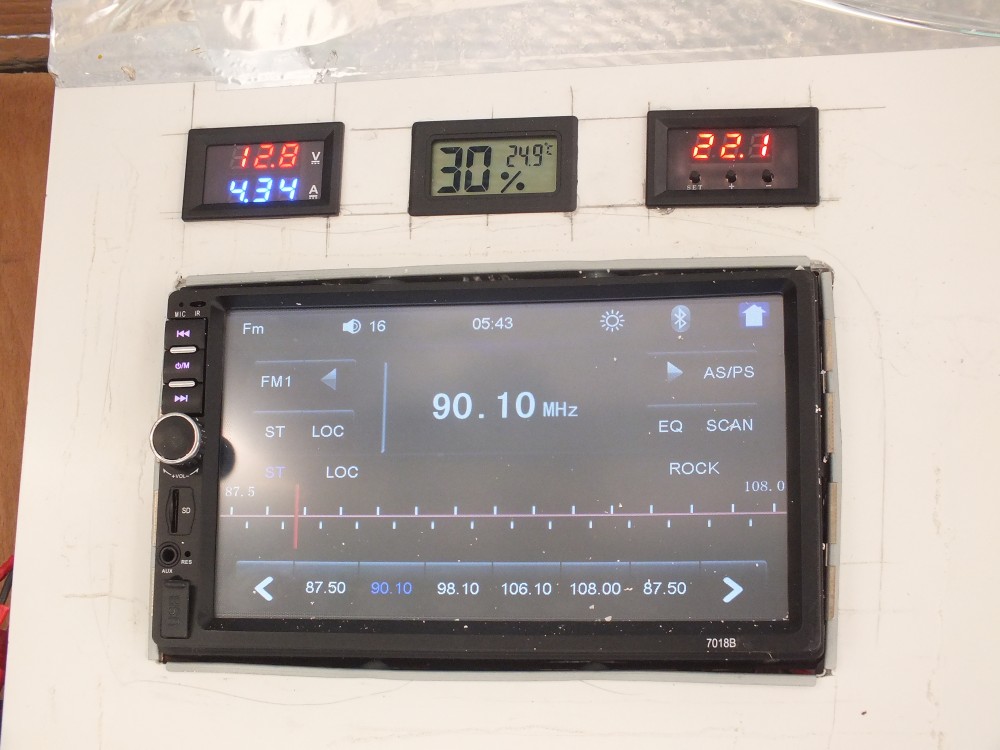 With the draw unit, I started to cut up the remaining Dibond sheet for a nice smooth face. (vinyl wrap in a wood effect I think) 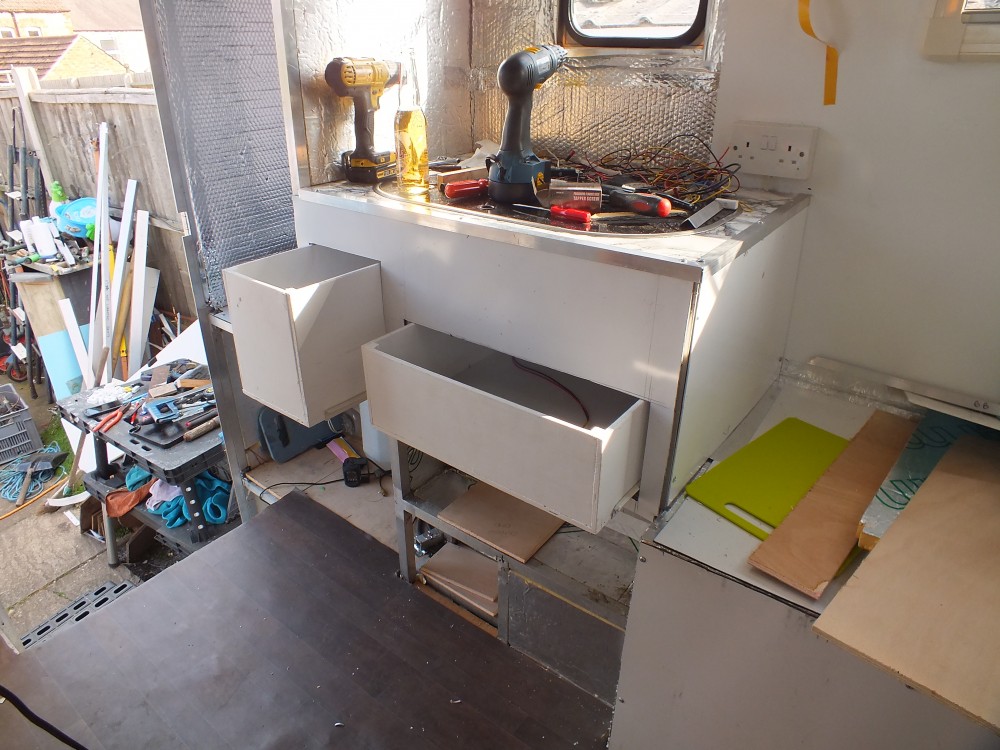 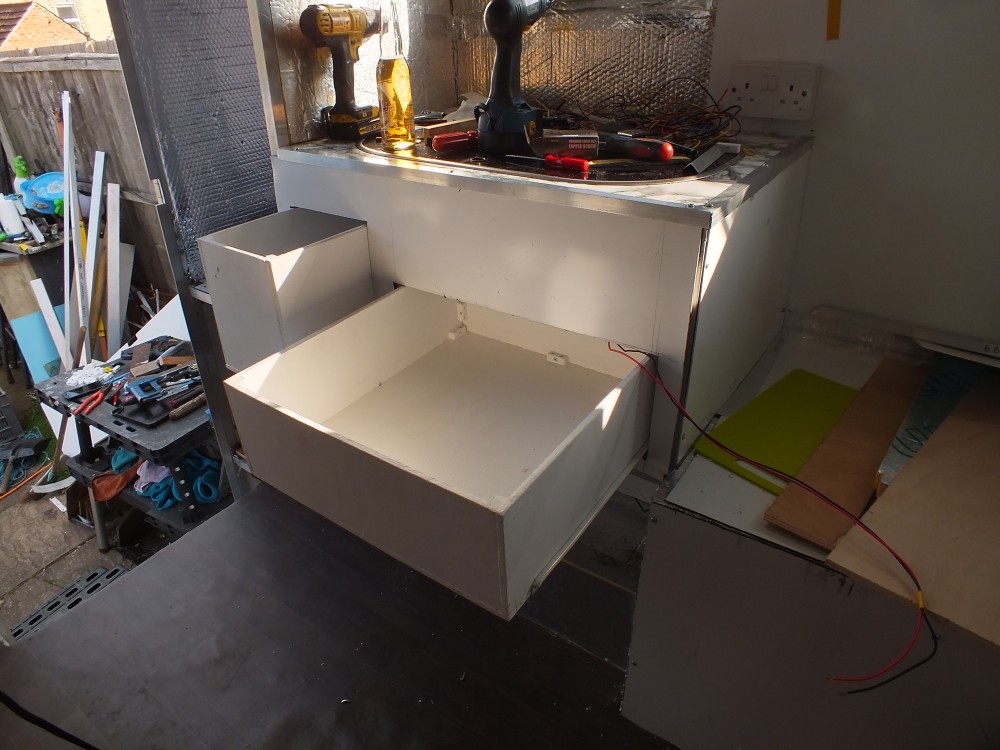 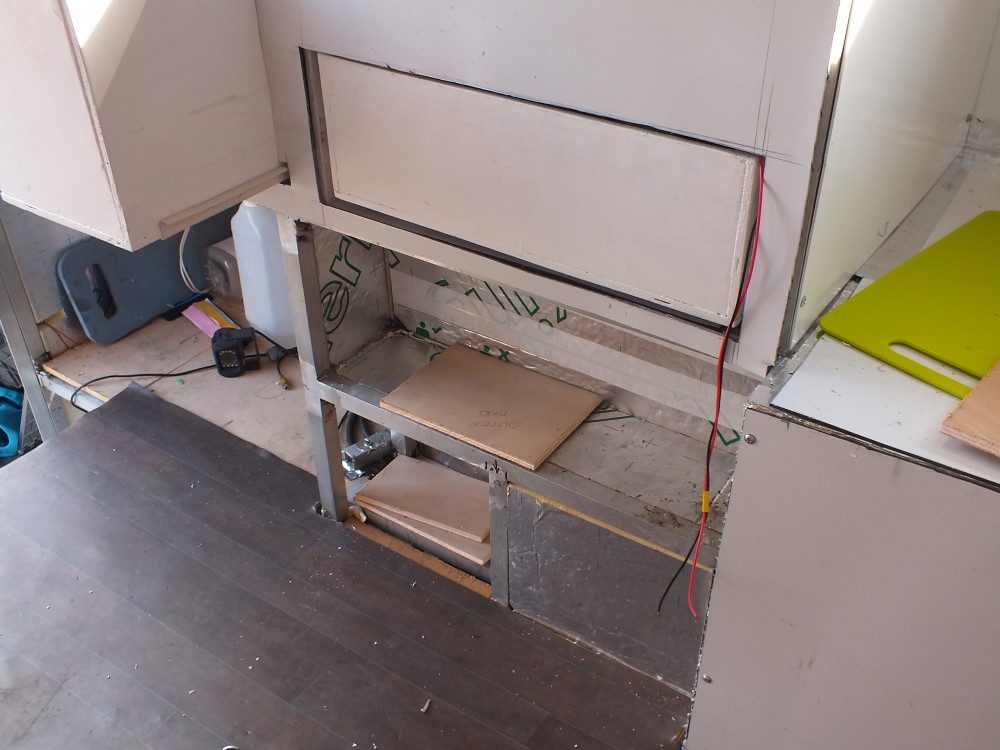 A quick mock-up of the potential finish appearance. 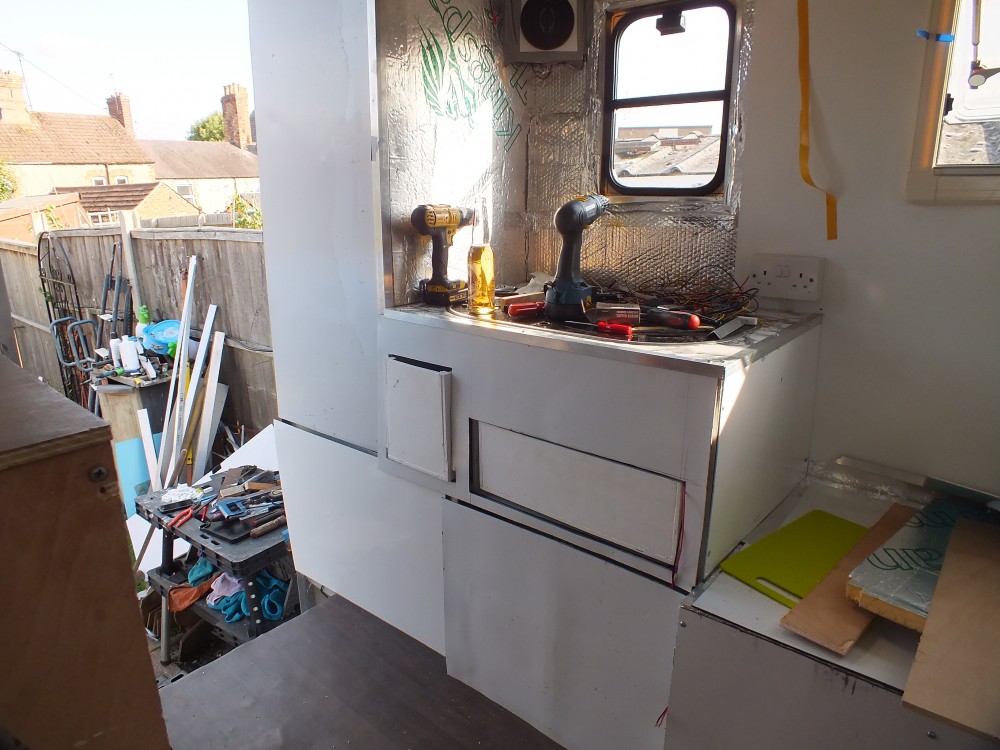 This is with the cut Dibond standing in place. 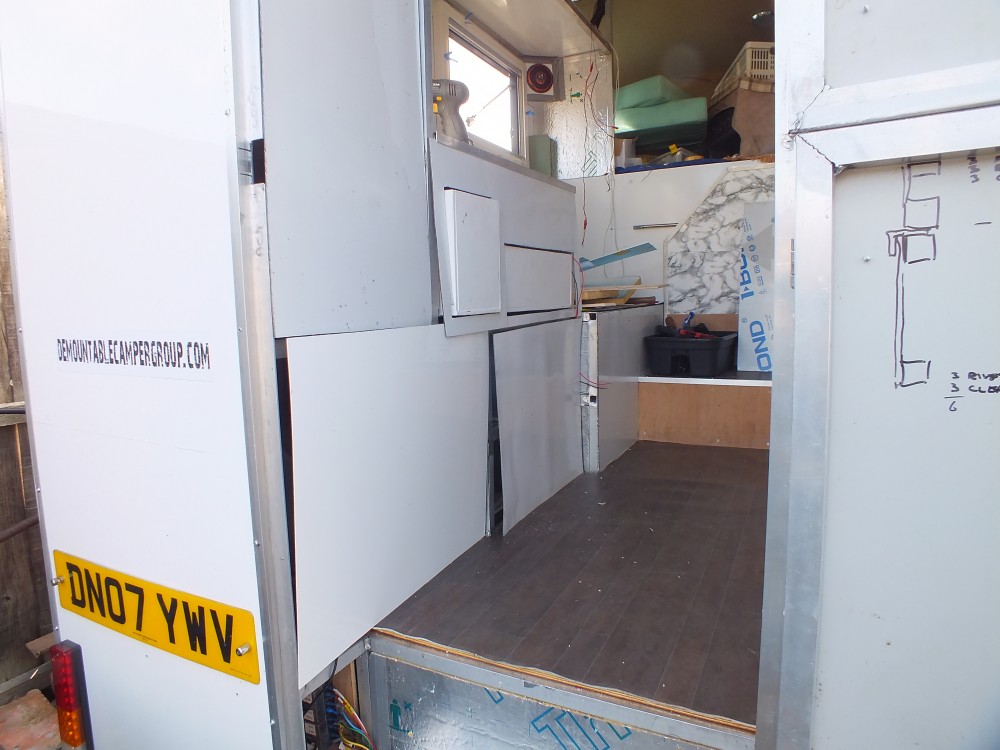 STILL PLENTY TO DO

but it will soon be time for another trip to Santapod for the European Finals. On checking the ticket details it appears the gates open on Wednesday morning

With the meeting not finishing untill Sunday evening it could turn out to be my longest outing to date.

Thanks,
it's true it has slowed down a bit being usable, but I am hoping the winter dark nights might allow me more time to work inside as gardening and life seem to get in the way. With the electric hookup and the greenhouse fan heater, I should be toasty, and have power to run the radio.
"Success consists of going from failure to failure without loss of enthusiasm" .......(Winston Churchill)

It was over 30c inside the camper today just after 9am. Too hot and uncomfortable to do much inside.
The 3rd draw, the lowest one, has turned into a hinged sort of drop-down cubby

The depth was too small to allow the cut down slider units to function. I am hoping I can get a fire extinguisher to fit in it

Since I fitted the internal thermometer and hygrometer I have just been keeping an eye on the values.
In the mornings, with the doors and windows shut the humidity goes up to about 65%. When everything has been open for a while it drops back down to about 35% (at the minute). I think I need another hygrometer outside to act as a reference. I am interested to see what the change will be on my next trip out when I am in it and breathing water vapor out all night long.

Working on the camper outside (on the shady side) was not too bad in the morning so I had a play with a few pieces of vinyl wrap just to get (a.) an idea what it's like to work with and (b.) What my idea looked like. 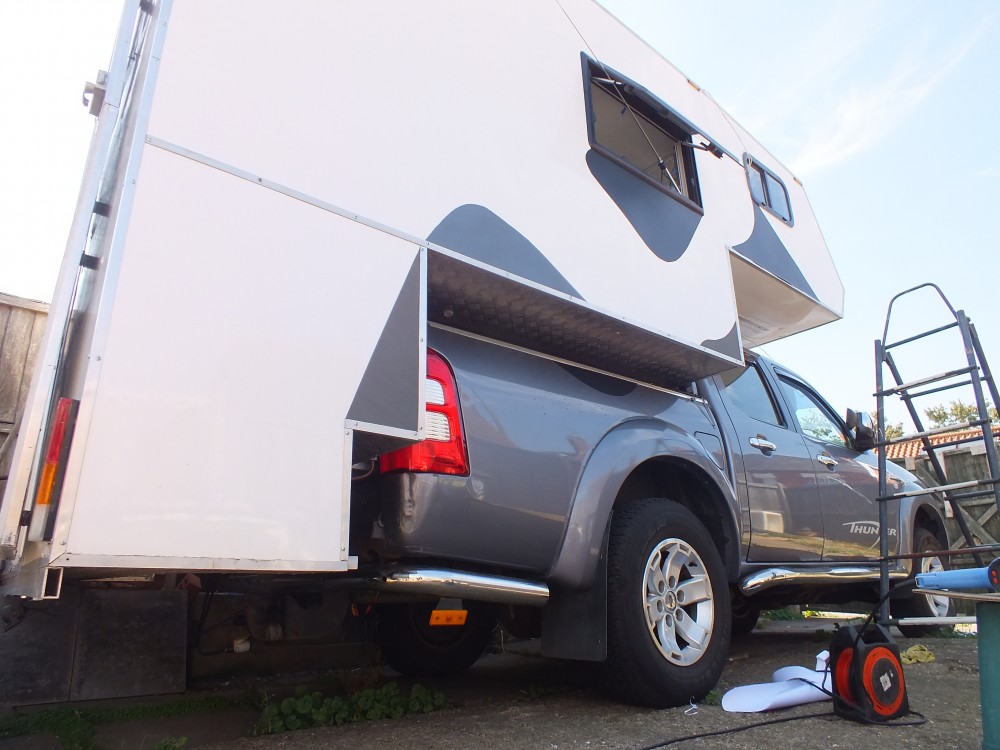 Being on the shade side it was difficult getting a photograph looking into the sun but you can get a general idea.
The titanium grey and matt black are a little difficult to pick out.

I have learned I need to cut and form curves better

Scissor cuts tend to look like saw teeth and inconsistency in curve generation looks pretty bad, even from a distance.
The idea of having a 3 color camo effect looked better in mock-up than the real thing. It might be better with more individual parts as I only cut up about 1/2 meter of each of the 2 colors

At least it will peel off (I hope). I shall leave it on for weather trials. I tried some mirror chrome wrap on my teardrop but after 3 months it went a sort of dull light pink

( It was only cheap stuff)
Too hot now so I have written this in the cool.
"Success consists of going from failure to failure without loss of enthusiasm" .......(Winston Churchill)

I recently bought a portable AC unit for home use
and that runs in lounge here for roughly four hours before needing its 1L moisture filter emptying
Also see; http://truck-campers.uk/
& https://www.pinterest.co.uk/RichardZildjian/
Top

I am surprised, that's not very long. I remember the advice that I was given when building my teardrop. Ensure that there is adequate ventilation to lose the water vapor. Many wooden builds rot at the bottom edges where the condensation runs down the walls, not from external leaks. I fitted vents at floor level as well as having a roof vent. I had no problems with condensation, mine leaked and delaminated

It was too hot to do much today.

I did manage to fit the bottom dropdown cupboard 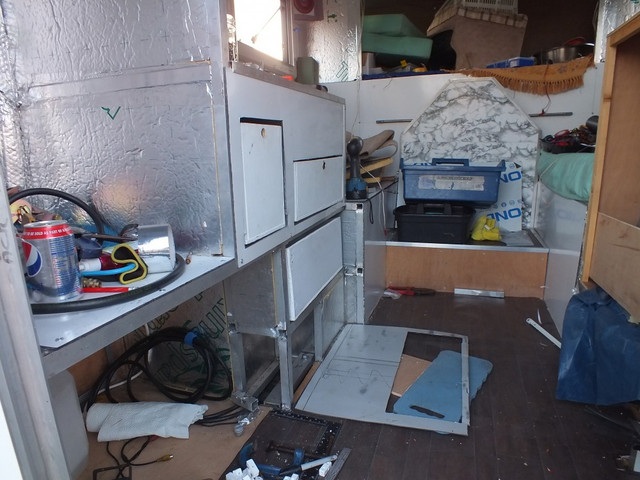 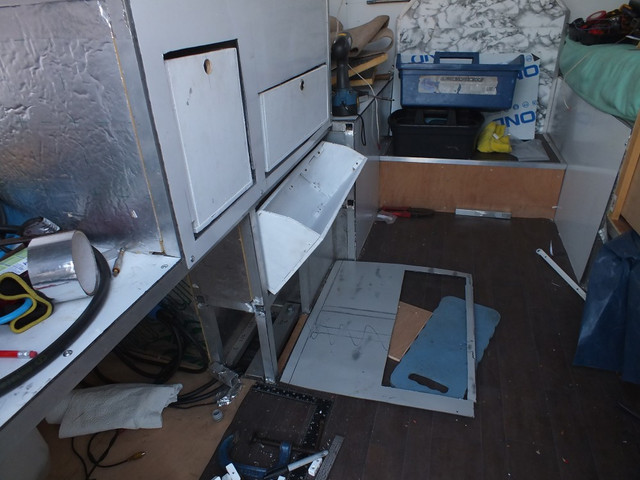 In the early evening when the sun was below the yardarm a cooling G&T and a little energy and enthusiasm returned.
I had another play with the vinyl wrap. Having already decided it is coming off in its present form.......eventually 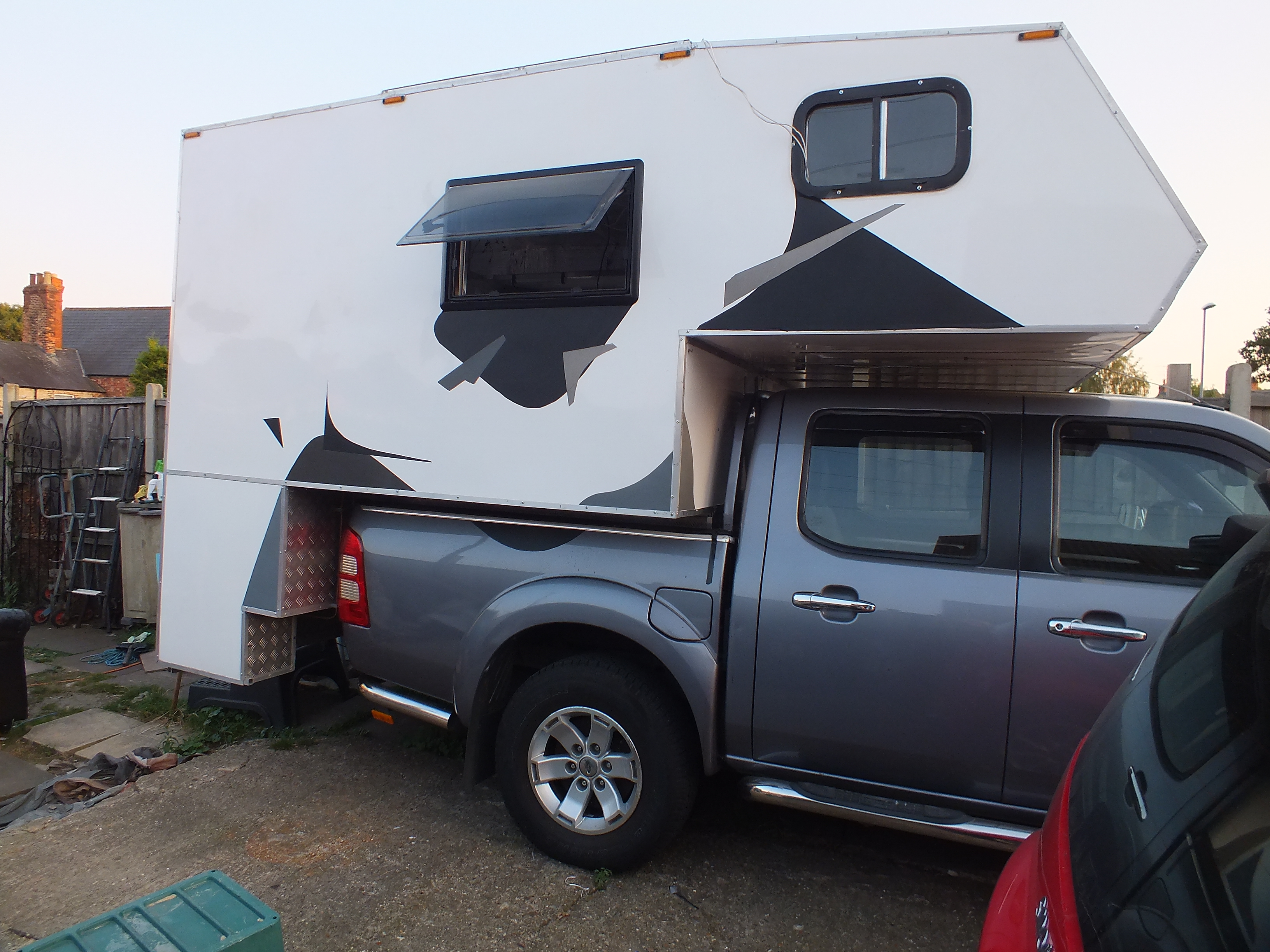 I collected all the offcuts that I could find and stuck them on. It makes it look slightly less like a milk delivery lorry

I noticed an interesting fact, well it was to me, that the brushed titanium grey took on different shades depending on your viewing angle 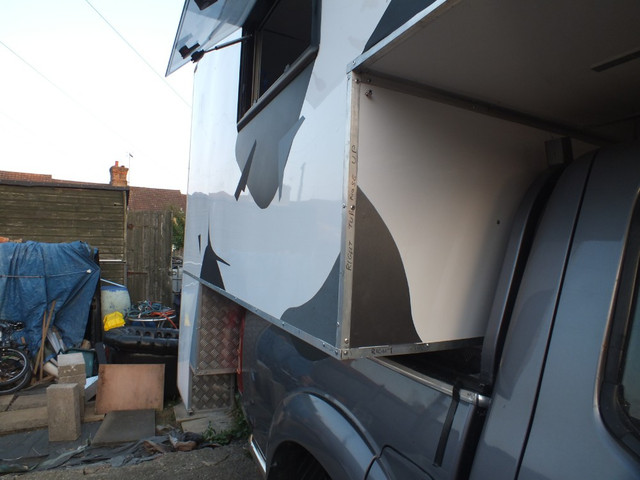 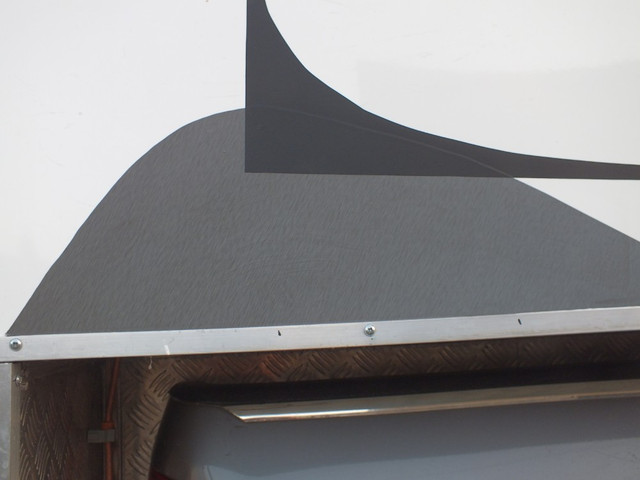 Grey at the bottom, black above 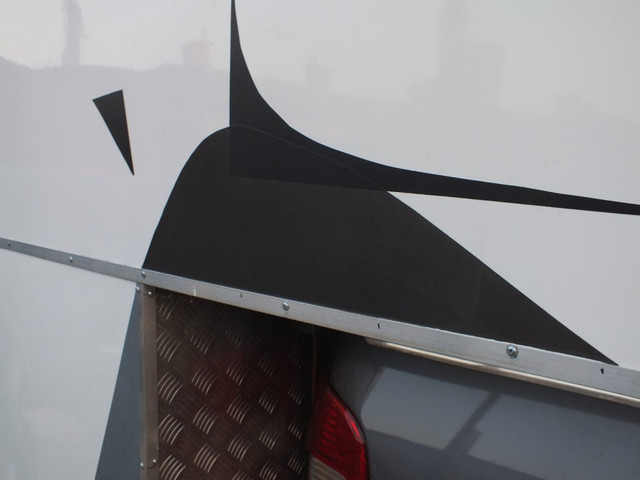 Not only does that give me more design options but also it means if I want all to look the same I need to lay it all the same way. The grey at the bottom left is the same as the mid-grey except oriented 90 degrees.
"Success consists of going from failure to failure without loss of enthusiasm" .......(Winston Churchill)

Surprising isn't it how just a few fluid lines break up an otherwise featureless structure, I like it.

I have to admit that I am pleasantly pleased considering I only cut about 1/2 metre off both rolls,(black and grey) to play with. I think the next attempt will be more angular with the vinyl cut on a proper cutting board using a straight edge. I am going to cut out a selection of random shapes and stick them on the other side