We're onto our second Eagle cover now. Over time the catches (only aluminium) that lock down the rear end of the cover got increasingly worn, then started to crack, and eventually lost chunks and failed to work - that was over about seven or eight years though and with frequent use. I still reckon they're a good buy - in both quality and value.

We tried leaving it in place, rolled up, with the pop-top but found on a long trip (2500 mls round trip) that there was enough movement to cause slight surface damage to the camper. Those hard rubber 'buffer' blocks are about 6cms thick but that wasn't enough to prevent it. That was why I fixed this ali plate to the front ... 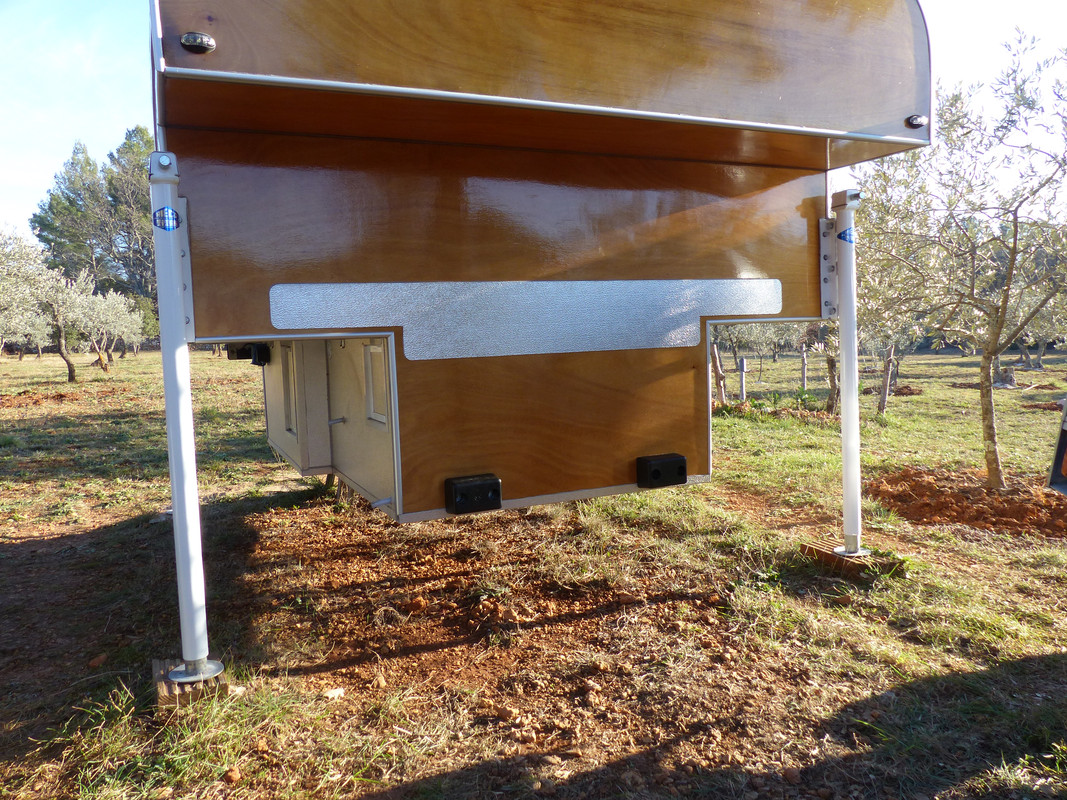 I remove the whole cover, including the side rails, when we carry the Rhino - partly to prevent that damage but mostly to make sure the camper can go as far forward, and as low down as possible.
Martin

Thanks, Martin,
I might need rubber buffers as I have a 50mm thick piece of wood both under and at the front end. The tub height is just too much higher on the Wildtrack compared to the Thunder. I was going to put some 50mm square "Ali" box rails for the camper to sit on but I only had 3mm thick section left and it was heavier than the wood.

I haven't put the self-adhesive rubber strip on yet so I could still take the whole tonneau off if needs be. Its only 6 x 6mm Allen screws.
I'll see how it goes.
I have put two extra hangers for the turnbuckle to the rear so if I get a chance tomorrow I might do a test run and see how it all performs.

I take it the windows in the base section of the camper are for access to tie downs?
"Success consists of going from failure to failure without loss of enthusiasm" .......(Winston Churchill)

Yep, it was always a struggle getting at them though!
Martin

I put a bracket with an eye bolt sticking out the side for easy access.

It would have been ok if I dropped the camper in the tub but it wouldn't fit through the tailgate.

. After modifying the bracket we are ready for a trial rock & roll. 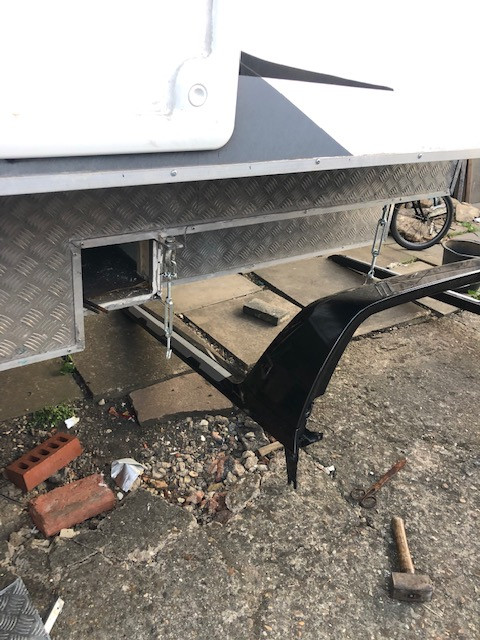 The rear seat there accessed via hatch on either side aren't too bad to get at, it was always the fronts as you can't see therm
I think other manufacturer's made a better job of it by having all the stuff you need to hand outside on front bulkhead


where it should be really
Also see; http://truck-campers.uk/
& https://www.pinterest.co.uk/RichardZildjian/
Top

The front turn buckles are a bit awkward to tighten up particularly when one has a LH threaded eye end and the other a RH threaded eye so I have to put them on differently to be able to do the lock nut up.
"Success consists of going from failure to failure without loss of enthusiasm" .......(Winston Churchill)

Back from the second weekend trip to Santapod.

I have decided the Eagle tonneau needs to be removed before fitting the camper. The extra 25mm thickness of the frame just means I need more height to get it in and out. Particularly with the uneven ground, I am preparing for block pavers. 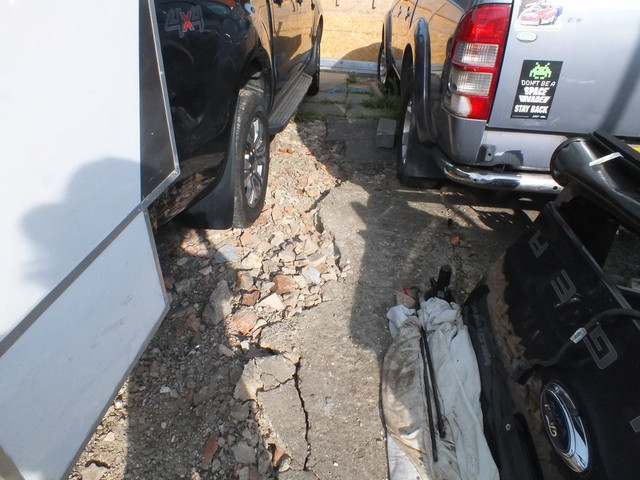 When the gas feed has been moved and I can pull the camper another 25mm forward there will not be enough room for the rolled up tonneau without damaging it.
"Success consists of going from failure to failure without loss of enthusiasm" .......(Winston Churchill)

hmm, got any ideas on how to leave tonneau in place (somewhere) along with loaded camper?
Also see; http://truck-campers.uk/
& https://www.pinterest.co.uk/RichardZildjian/
Top

I think if the tub on the wildtrack was not so high I could get away with the tonneau in place by lifting it vertically over the cab rear window then in effect folding back down again. Instead of a many-layered roll there would be just two or three layers. (No thicker than the end of the tub)
I am still standing the camper on 50mm wooden battens at the minute to make sure the sides clear.
I am unhappy to try fitting the camper without them until I get the drive block paved and flat. At the minute, because of the uneven surface, I need to be able to see out the back window to see how things are progressing.

I am hoping to eventually be able to leave tonneau in position with just perhaps 25mm Ali box strips fixed to the bottom of the camper.

I have made one other improvement and will post pictures soon.
On the old thunder truck, I had an aftermarket reversing camera fitted. I had another camera on the back of the demountable which I could plug in when mounted.
The wiring was a bit, well, Heath Robinson.

I was unhappy with not being able to see behind so this time I have gone for a twin camera wireless set up. The screen lays relatively flat on the dashboard when not used and stands vertical when plugged in the power socket.

At the minute power to the cameras (One at roof level looking down while the other looks straight back) comes from the campers onboard battery and has to be switched on before setting off. Also, I need to remember to turn them off when not in use as they both have infrared night lights that come on at dusk. At about £90 it was not a high-end setup as I do have to switch screen feeds for alternate cameras (no split-screen)
Not fully plumbed in yet but it works well. I was worried my aluminium space frame might act as a Faraday cage and block the signal but all seems good.

After the 3-day weekend trip to Santapod, I did have to retighten all 4 turnbuckles. I think it is solid now but will recheck after more bouncy side road work.
"Success consists of going from failure to failure without loss of enthusiasm" .......(Winston Churchill)