Heater; What did you decide on fitting a heater, I think you mentioned the Chinese Eberspacher type diesel heaters awhile back?
Also see; http://truck-campers.uk/
& https://www.pinterest.co.uk/RichardZildjian/
Top

Yes, heater. I do intend to get one of the relatively cheap Chinese diesel heaters. I need to research them more because I want a specific controller. After reading an article (www.thedoble.com/campervan/installing-a ... -campervan) where a controller was added to the heater to make it much more user-friendly and controllable. It is called "Afterburner" and is manufactured in Australia by a guy called Ray Jones.
I have been in contact with him and it appears to fit 2 out of 3 types available. The price of about £40 + £17 pp. I have a buddy going out to Oz for a month soon and hope to get him to bring one back for me assuming I get the right heater.
With a bit of luck, it will fit nicely in one of the storage boxes under the shower room

While on topic, I have also been reading how some heaters have been modified to supply hot water as well, although, this has been thrown off the "Diesel heater facebook" thread. But again, more research is needed to ensure if needed, it will all fit. Hot water would be nice

Just a quick word.
It's been a long time with little done to the camper since it has been in a usable state.
The weather was fine yesterday so it's time to get my finger out and get on.

I ordered some new brake lights for the back of the camper.
I refitted the roof bars to the truck and fitted my 8x4 aluminum frame to allow me to collect yet another sheet of Celotex insulation board that is needed for the stable doors and toilet door. I will be using the frame to fetch some more 2mm Pvc sheets to finish lining the walls. I need to make the frame a little shorter in length to support the ends of the sheets better. The Pvc sheets are quite flexible and on my trip back from Bradford (where I found the most economical sheets), they tried to get away when the wind lifted them causing a bit of panic on the smart motorway when I stopped to secure them.
I think what has spurred me into action is sorting out my ticket purchases for this year's drag racing and realizing just how quick it will come around again. Time to fit in the meetings I want to try to attend is already becoming a problem with dates clashing. What with Drag racing, some classic motorcycle races to attend, this year's demountable runaway and one or two teardrop meets I can see another year where the garden will look like an airplane crash

More photo's as soon as I get going in earnest

although the weather is rough again today.
"Success consists of going from failure to failure without loss of enthusiasm" .......(Winston Churchill)

It's not outdoor weather at the minute with gale-force winds and rain so just to feel as if I'm actually doing something.

. I always thought the seats were hard to sit on. The foam came from Dunelm and was not cheap at £25 for a 1 meter by half a meter 100mm thick block so I am reluctant to replace it, at least for the time being. I thought I would try to increase the softness by adding a layer of fiber wadding. I foolishly thought that the 8oz wadding (reputed to be about 12 to 16 mm thick) would be overkill but nah! 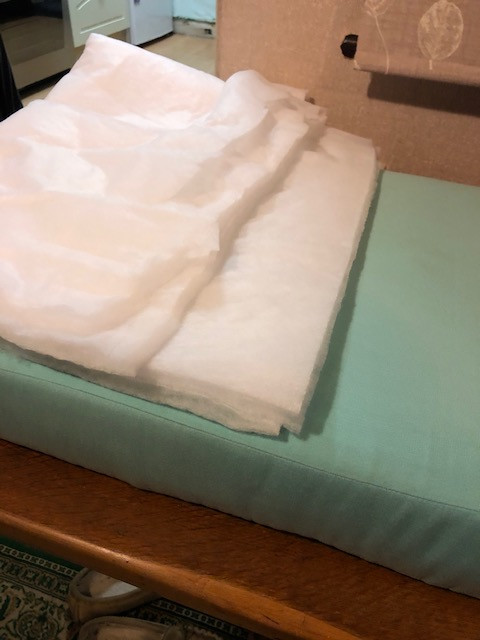 I suppose it is without any weight on it at all but only 1-2 mm compressed.

I had ordered enough to do all 4 squabs but I finished up putting a double thickness on one face only. Still not quite what I had in mind but it will have to do for this year now.

Washed and dried, 2 layers on the front and back edges as well as the top. I had thought about putting 3 buttons through, again to try to soften the squab but having used near waterproof material it seemed daft to put holes in it to make it into a cullender. Had I been able to source some upholsterers silk at an economic price I could have covered the foam making it waterproof and easier to get the cover on without everything ruffling up but I could only find wholesalers where a roll was £100+. 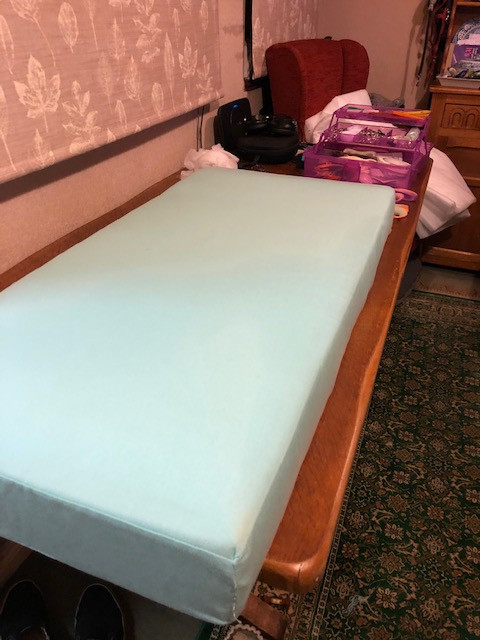 It doesn't look much different but it is, honest.

Three more to do now then I might have a go at some window curtains and curtains for bed privacy if the weather doesn't allow me out to play.
"Success consists of going from failure to failure without loss of enthusiasm" .......(Winston Churchill)

A little better first thing so I was able to do a bit outside.

I managed to cut up the Celotex into roughly the required sizes. A sheet of sterling board collected at the same time was also cut up.

I found that in use, not only were the seats not as comfortable as I would like but, the height which was governed by the tub height was too high. Sitting up to eat at the table, my legs were dangling being on the short side.

The extra height made up with a 100mm subfloor to compensate. Further use will tell if the step is a problem tripping. At present I think the area is too small to consider using it as a storage area unless I need space for a hand towel or two. 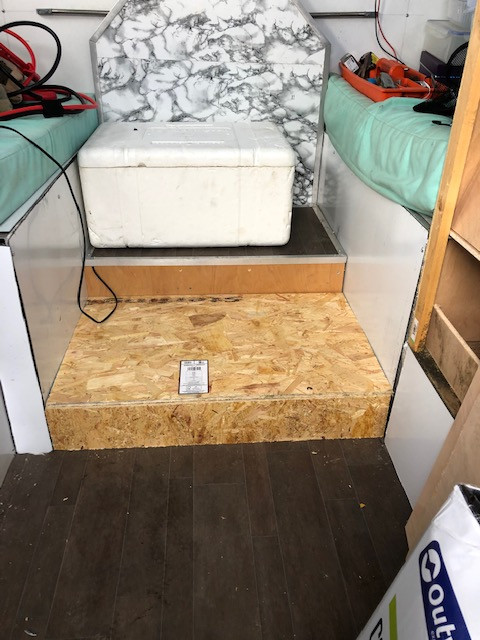 Then the rain returned so I primed some of the plywood storage cupboards in the camper.
"Success consists of going from failure to failure without loss of enthusiasm" .......(Winston Churchill)

Adding upholstery string to your bow now?
seems nothing you won't turn your hand too is there.
I shall take pictures of my step set this weekend and you can have a go at a set of those too next
as I think you don't have quite enough things on the go....

That would be good. I was wondering about those

Plus the fact is, I may not be very good at it but, as you well know, someone else never does it the way you want it done.
Also when I put the "Built not Brought" sticker on it I can say I did it all, my way. 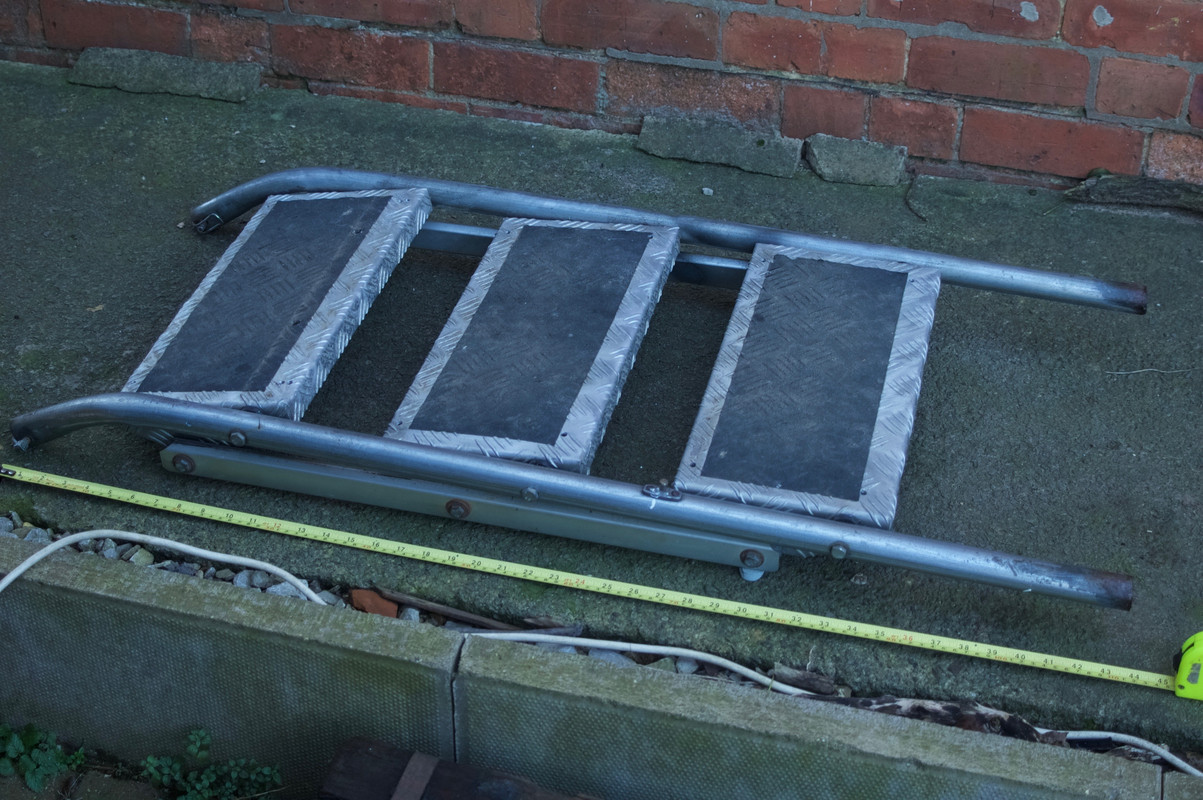 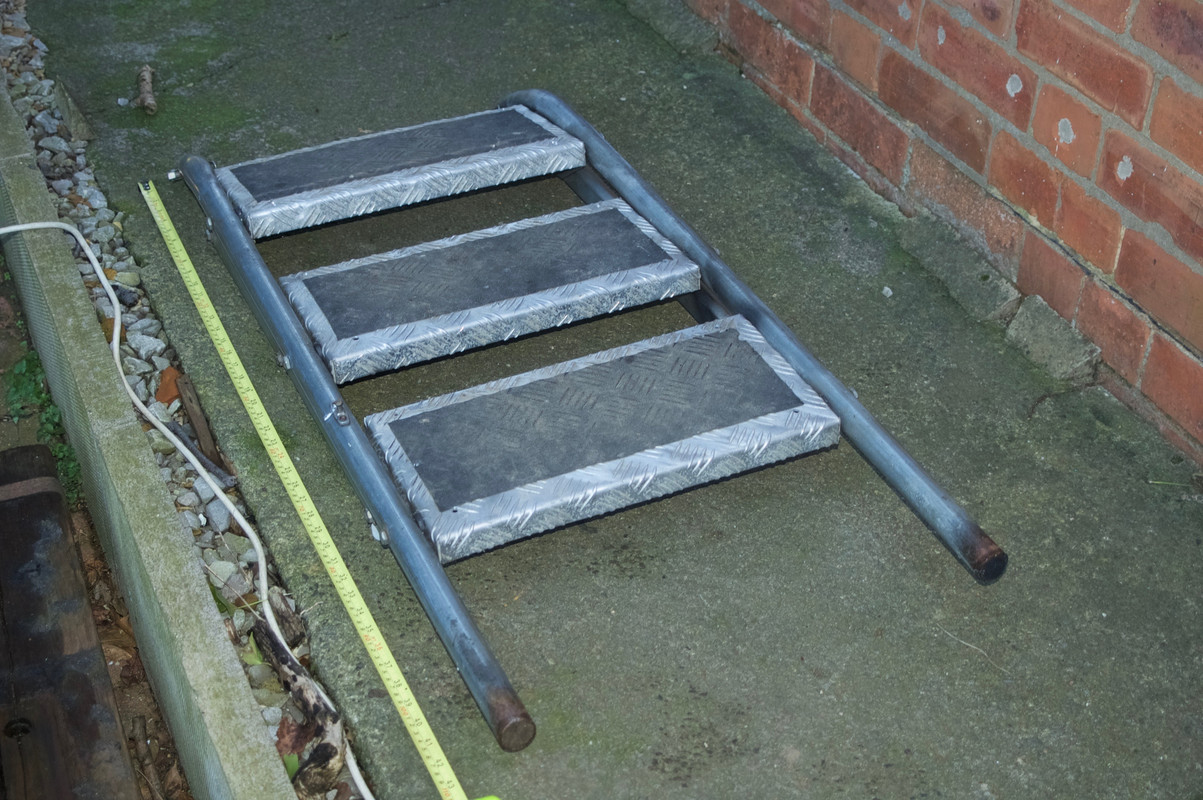 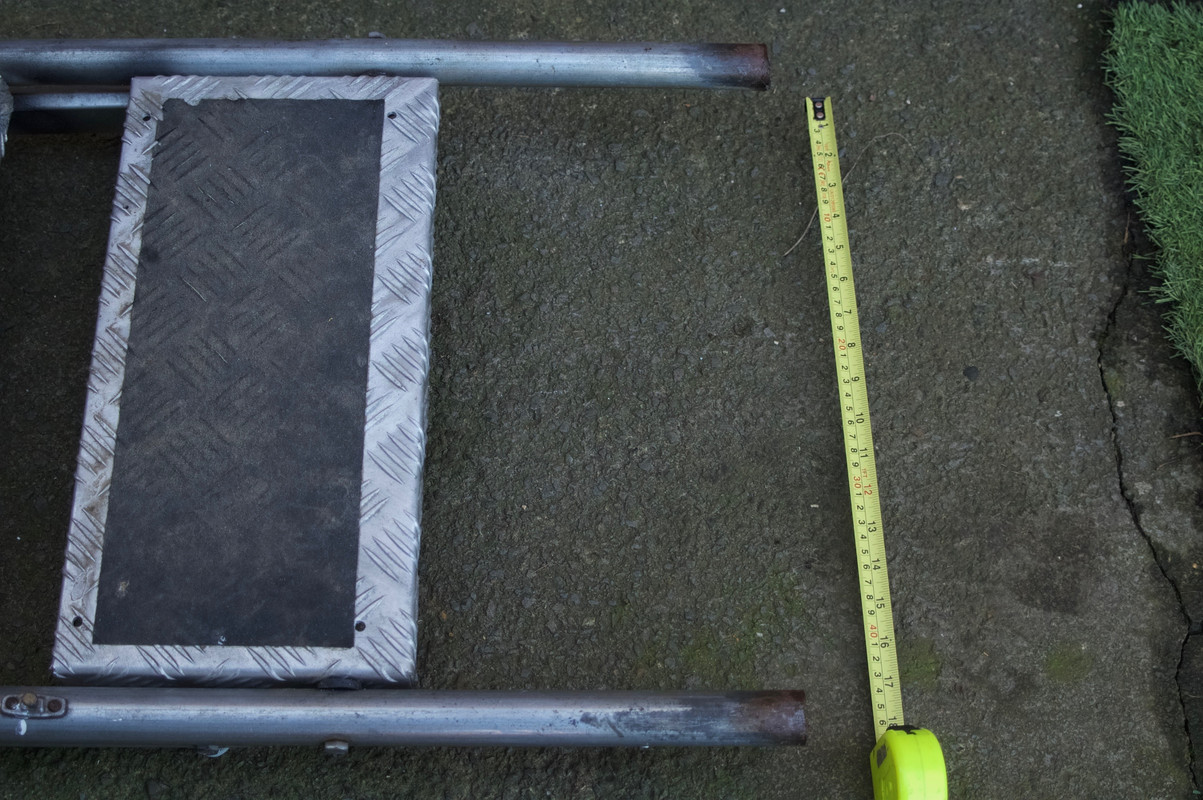 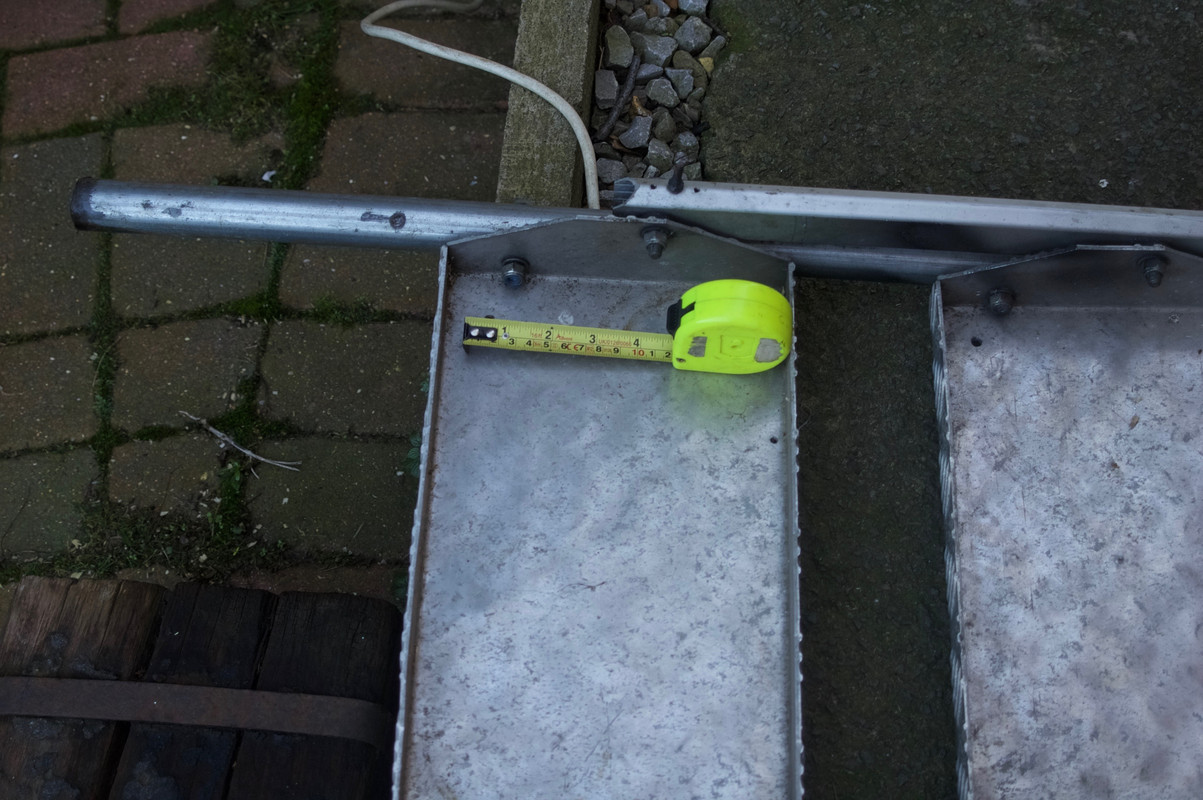 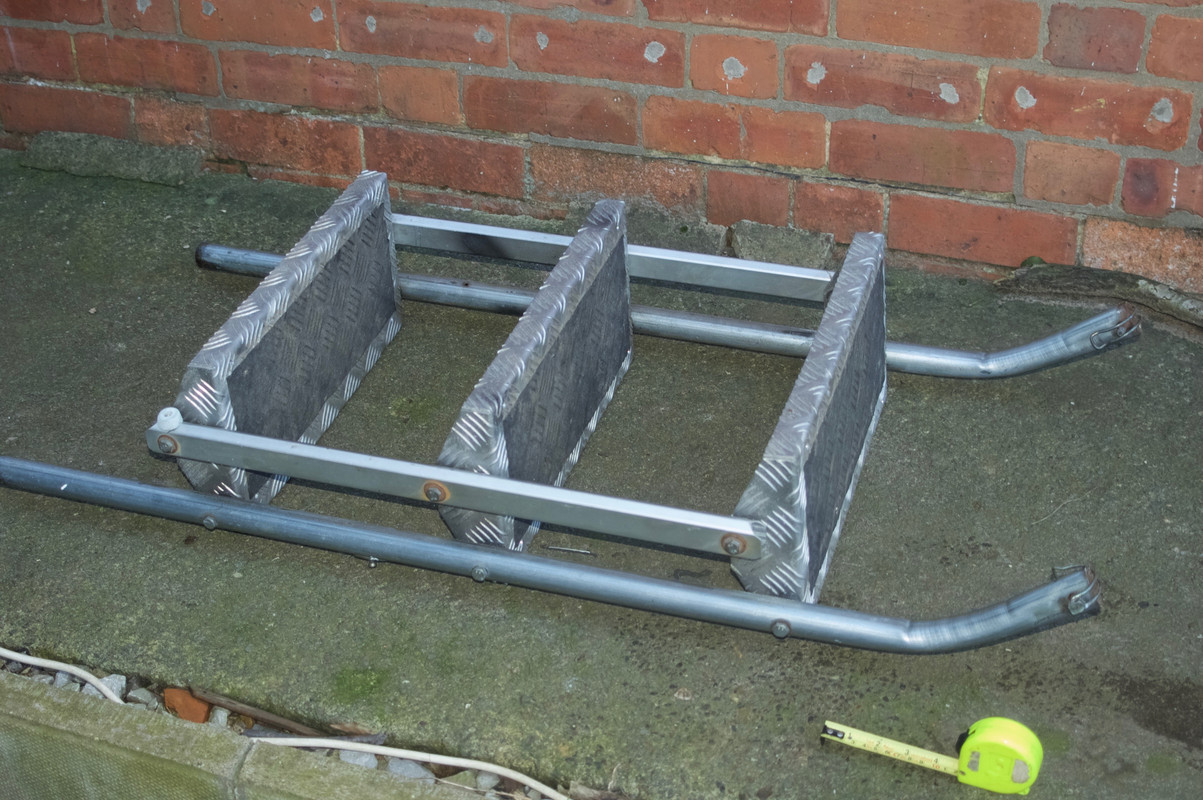 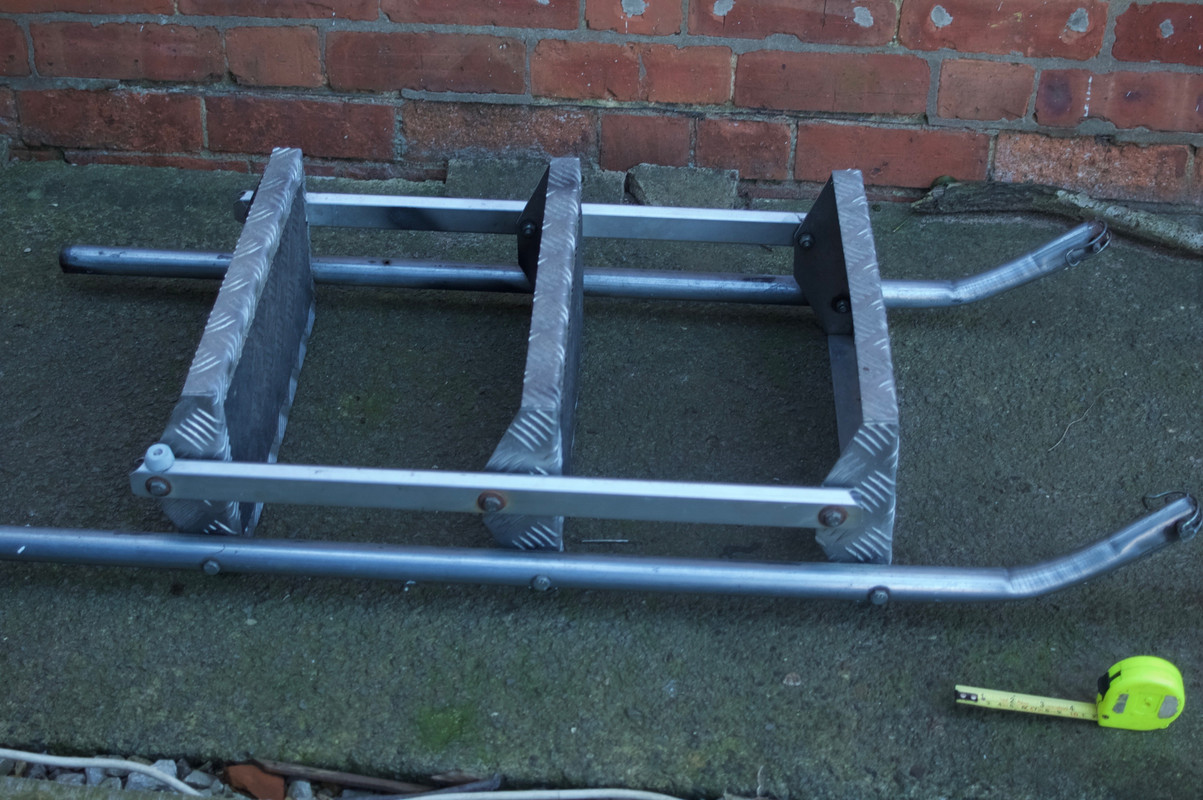 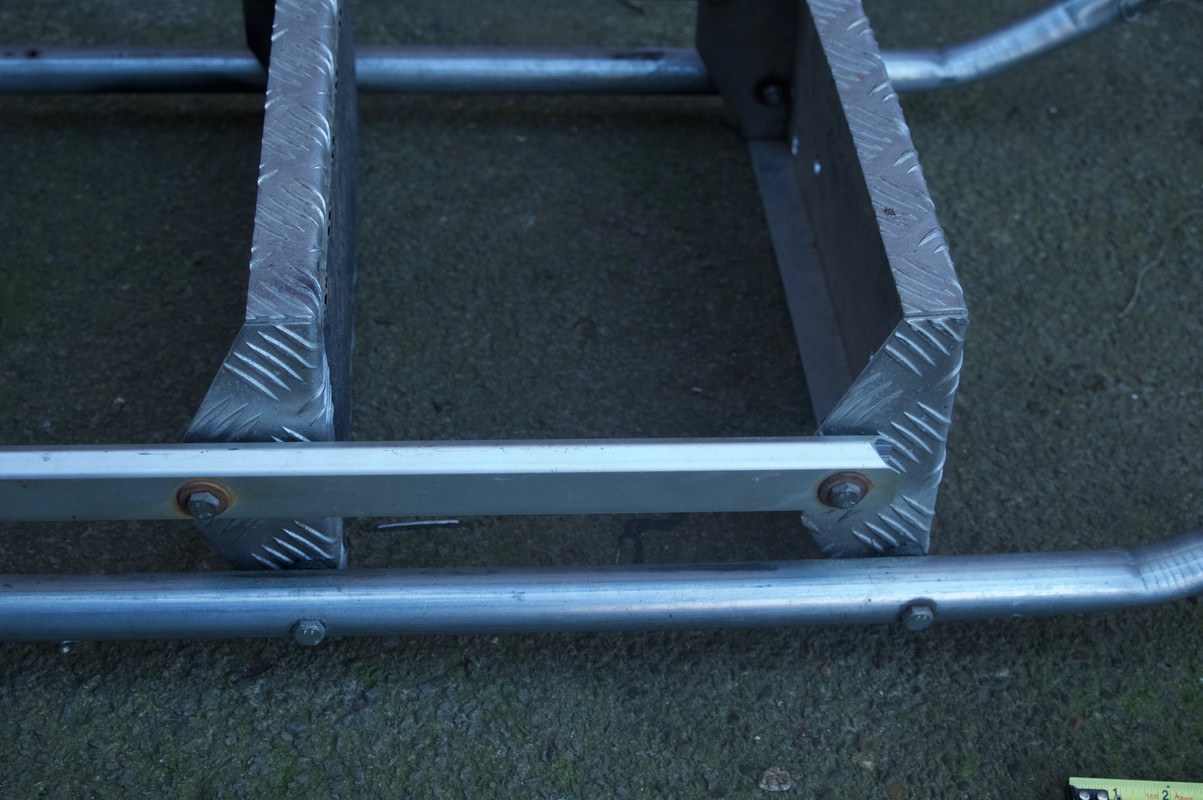 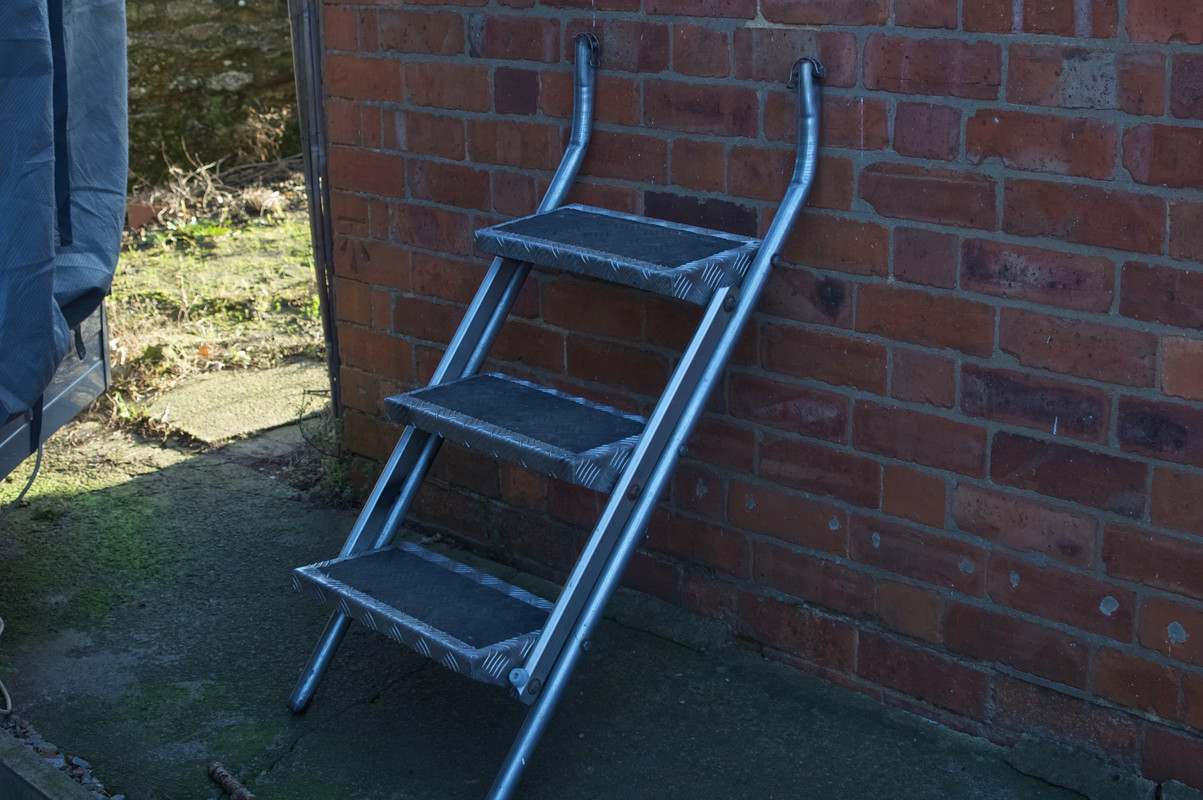 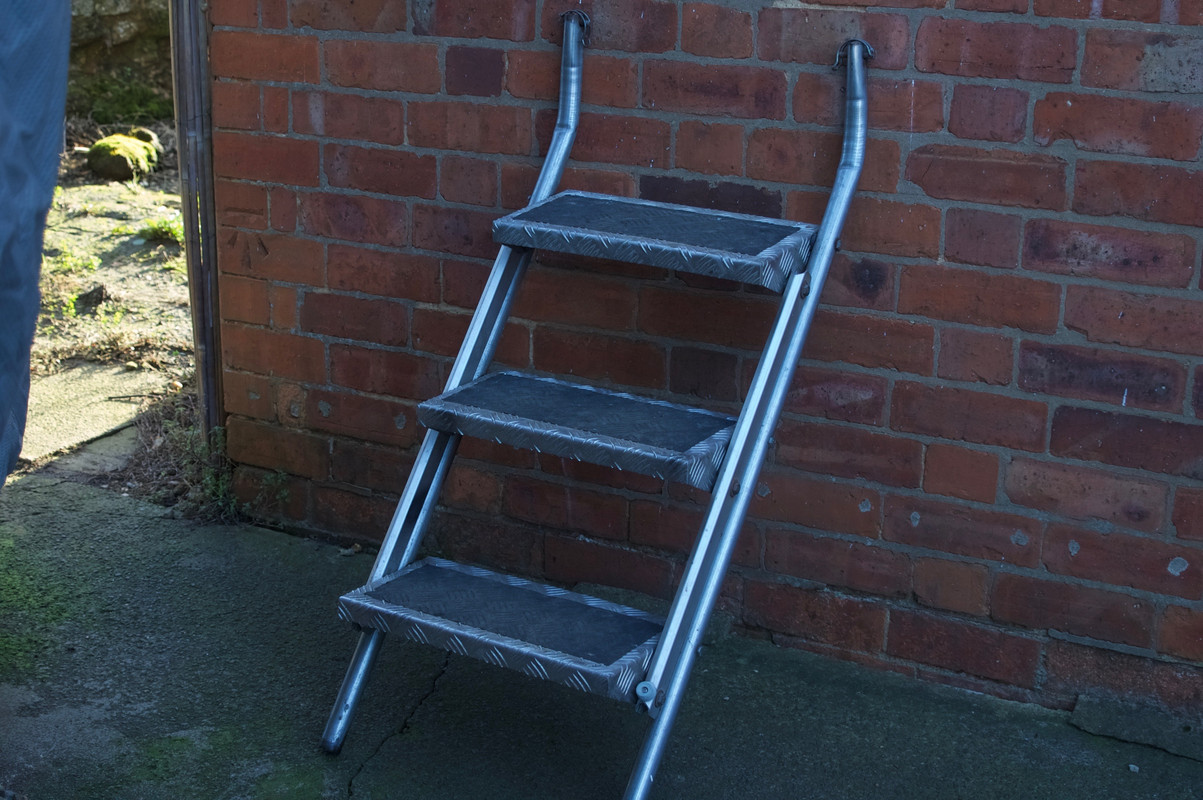 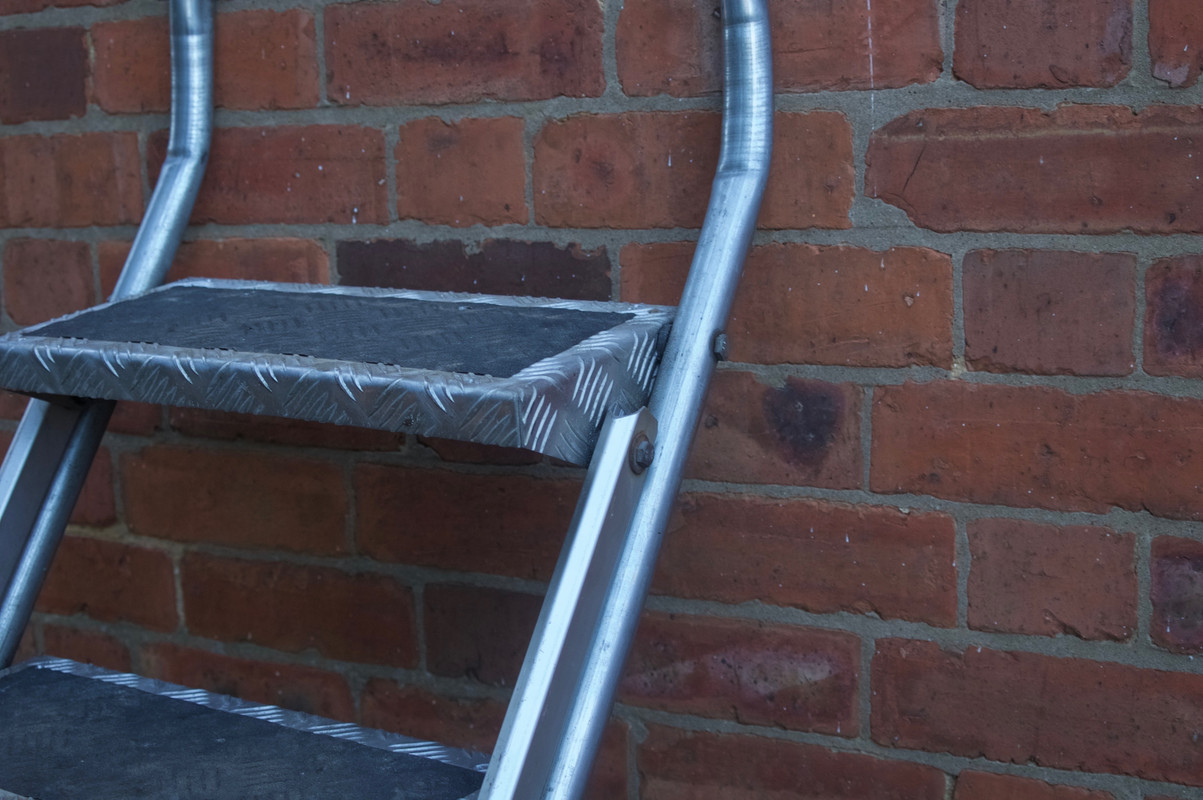 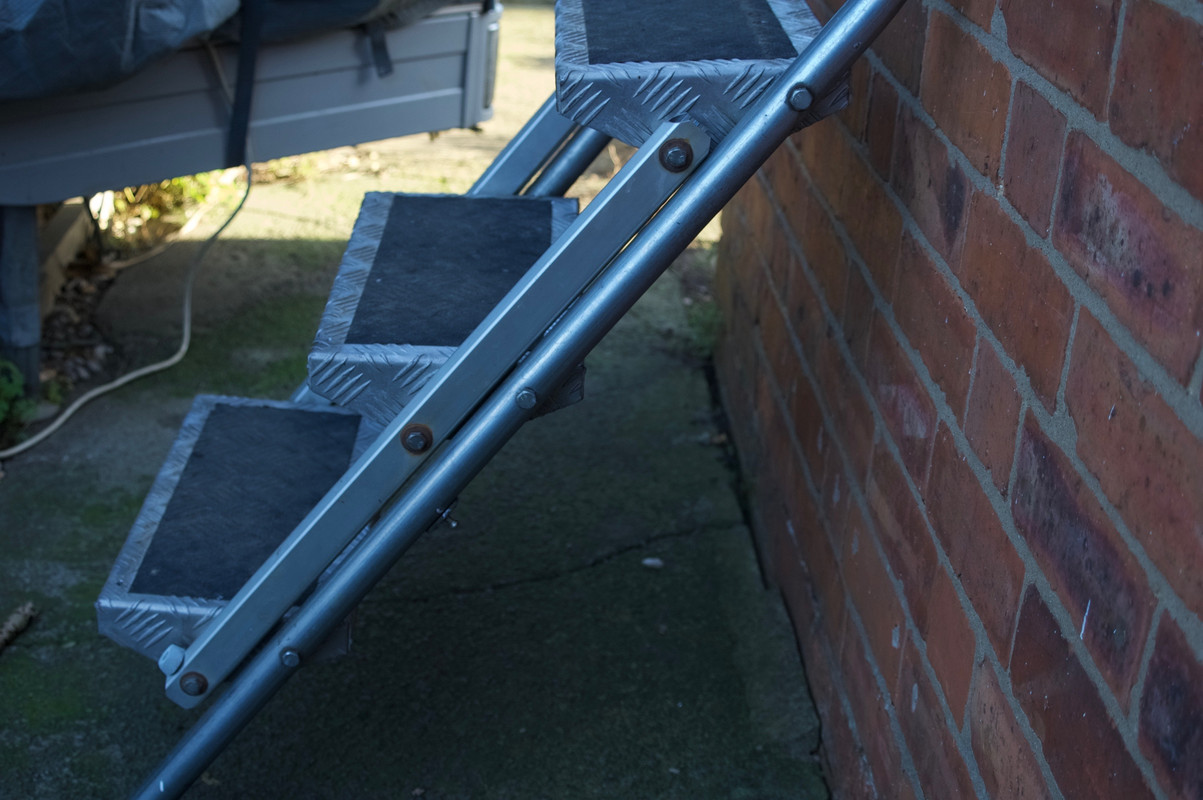 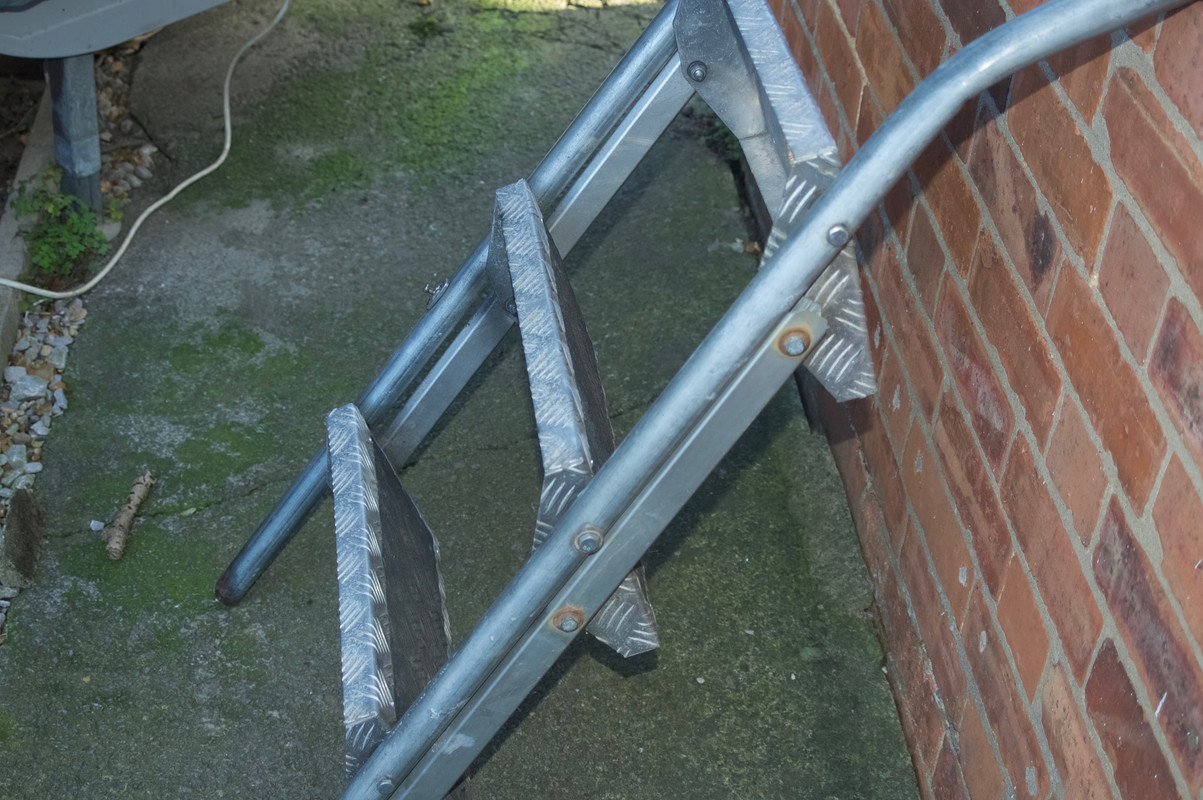 Zildjian,
Thank you for the comprehensive set of photographs complete with a rule for dimensions. They will make a good pattern piece to complete my own steps when outdoor working resumes. Can you tell me if you put what looks like a sheet of emery cloth onto the steps for grip? If so where did you get it, please?
On the upholstery front, my local haberdashery store was having its new year clear out of roll ends of curtain materials. I couldn't resist 3 curtain poles and 6 yards of material for £20. So after the cushions, it looks like it might be curtains for me.
As always, photo's to follow
"Success consists of going from failure to failure without loss of enthusiasm" .......(Winston Churchill)

'Skateboard tread' great product.
Its been on there for maybe three years now in all weathers, sticks like S**t to a blanket and just stick on and in my case
deforms to fit over the chequer plate steps too 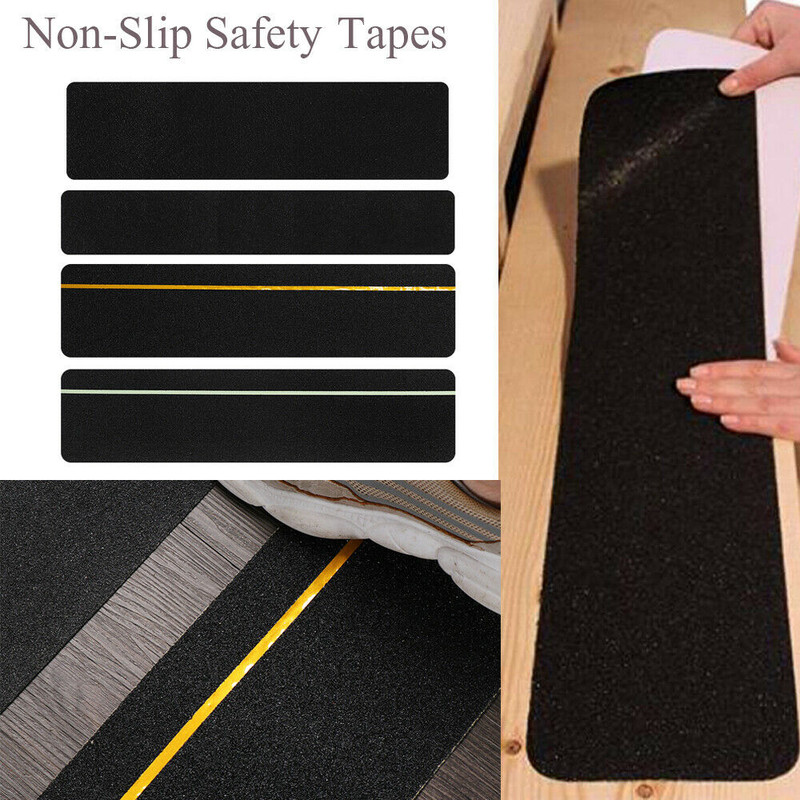 First one I found here is from China though I bought in UK originally
Also see; http://truck-campers.uk/
& https://www.pinterest.co.uk/RichardZildjian/
Top
Post Reply
449 posts