Well, that's one pair of tambour doors fitted. With a stop end at one end of the track and a snail track at the other, you have to think carefully about what to fix and when!

The parts for the tambour doors came from Kiravans in a sort of kit form. The straight track had an extra bit of depth to it to allow for screws to be put in but the snail track had none. This left the snail track about 2mm lower. It didn't make for a very smooth running door. It sounded like a ratchet. 2mm packers solved that problem but it was a good job I spotted it before the gorilla grab adhesive had done its thing. 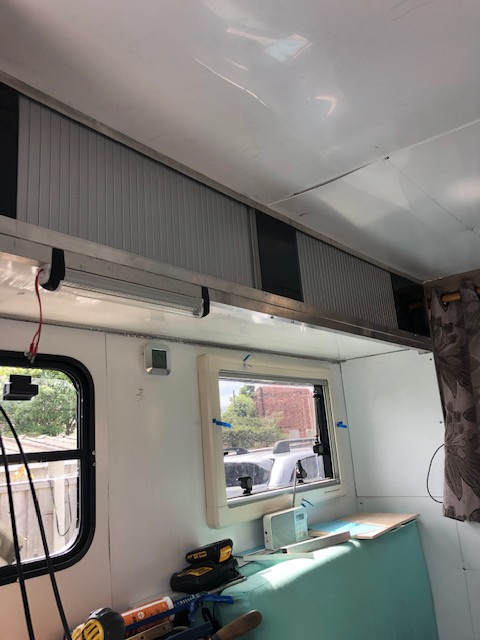 I am hoping the new remote and controller combination is working OK with the panel.
Without connecting any load to the load terminals the remote is displaying as shown 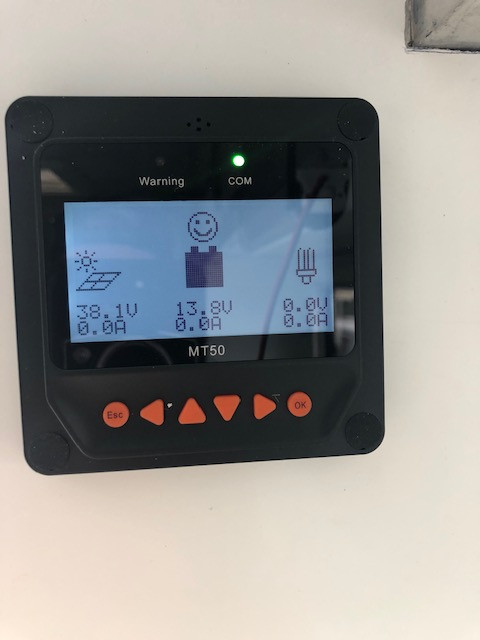 The solar panel was bigger than I envisaged but it is supposed to supply 320 watts so all that power should keep my 5-year-old motor mover/leisure battery topped up during daylight hours. It has been showing signs of getting past its best before date as without a daily solar top-up from my 40-watt panel it gradually loses its charge and the voltage starts to drop off. So.................... 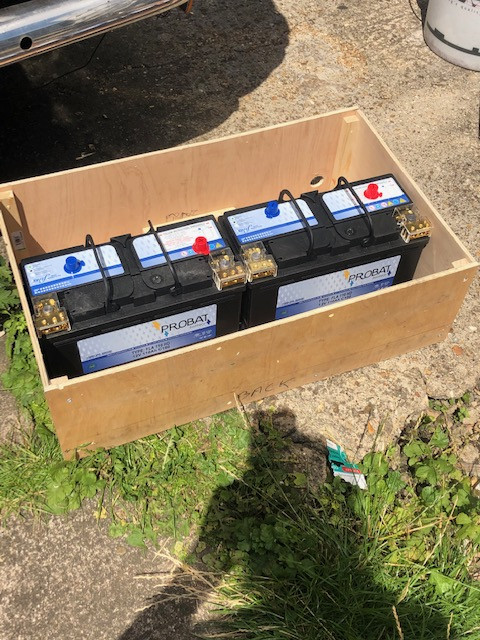 2x110 Ah, leisure batteries should fit the bill. They were going to fit under the seats on both sides but second thoughts and they will go in the battery box as before. I need to source some small plastic pipe to vent them to the outside instead of a dropout as they have a vent at each end as they are maintenance-free. When fitting them in the camper I put an isolator breaker in between the 2 batteries and another breaker to the controller and the to the solar panels.

Whilst perusing the Bimble Solar web site for some wire I noticed they do a 300-watt 12-volt water heating element to use as a power dump. Further investigation showed the solar controller can be set to turn the water heater on and off depending on the programmable voltage values available.
I will look into installing a hot water system particularly as the heating is virtually free

Slow progress Framing the Solar panel and its fixing rails with wind and intermittent rain.
The batteries finished up in the original box, at least for the time being. I still need to fit the clamps and vent tubes but they are in their positions complete with a trip switch to the pair and a trip to be able to isolate the second battery. 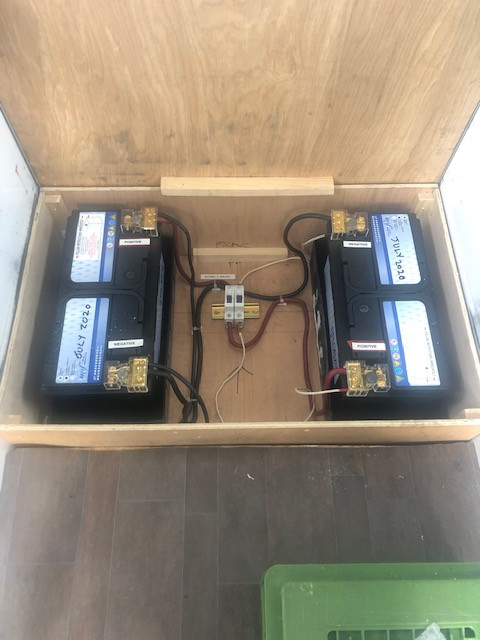 There is a trip to the power output that comes directly off battery 2. The power output from the solar controller is programmable to cut in and out depending on the voltage. I didnt want a total power out if there was a low voltage situation so some, shall we say essentials, will come directly off the battery 2. Some light, power to the water pump and hob ignition should do for that.

The position of the controller has moved again, this time to the back of the wardrobe. Having it on an outside wall means I will be able to vent the controller should overheating be a problem when the rest of the clobber is inside the wardrobe. A possible perspex cover vented top and bottom. More pictures when I get the second fuse board in and wired up.
"Success consists of going from failure to failure without loss of enthusiasm" .......(Winston Churchill)

I have had the solar panel off after marking the position of the left-hand angle. I have gone with a similar idea to be able to lift the panel up to clean under it. I might be able to convert it to a tilting panel later. The angle has 3 fire door hinges fixed to the angle framework surrounding the panel. Some fixing holes were drilled through the roof into the aluminium box. Apart from having marked their positions from the cad design, I was able to check their position in the early morning because I could see their imprint in the dew. Obviously there is still a cold bridge and not enough insulation but it is what it is now.
My tube of Sikoflex 512 was a little over its best by date but I am hoping it holds and seals the fixing holes ok. 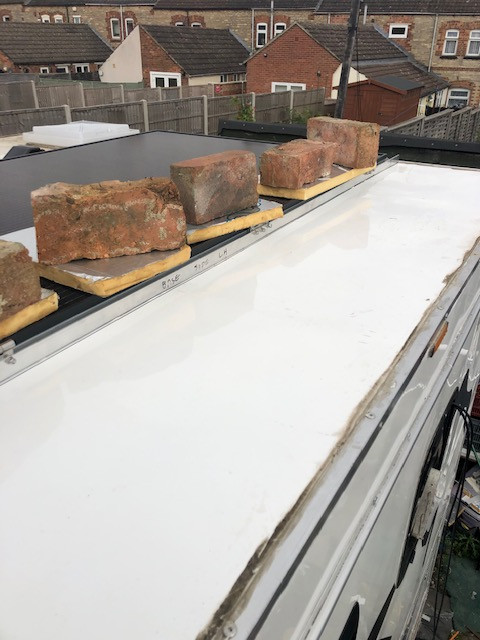 The fiberglass skin is not perfectly flat so a few bricks were needed to squash it down a bit.

When it has had a few days to set I will have a go at the other side.

Inside I an starting to fit the lights permanantly instead of having taped in position. The 3 small led strip lights each have their own push button so with them all conected to one main on/off switch at the door I can leave one or all on. I added a wood effect vinyl wrap to the end wall with a contrasting wood for the aluminium box. 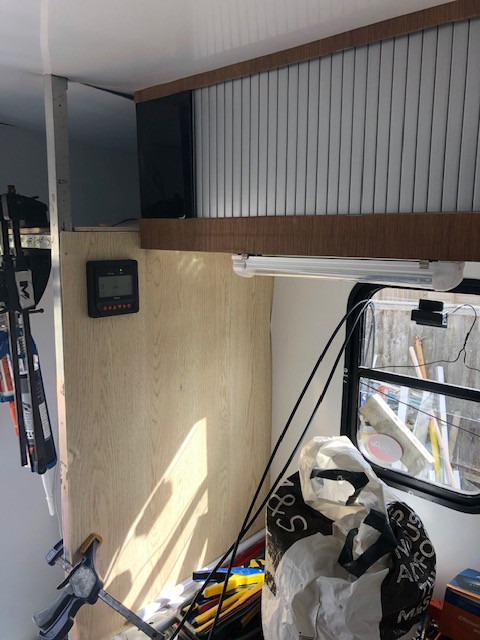 The tambour cupboard doors on the other side are in as is the radio. No wrap yet. Thats still rolled up in the corner. 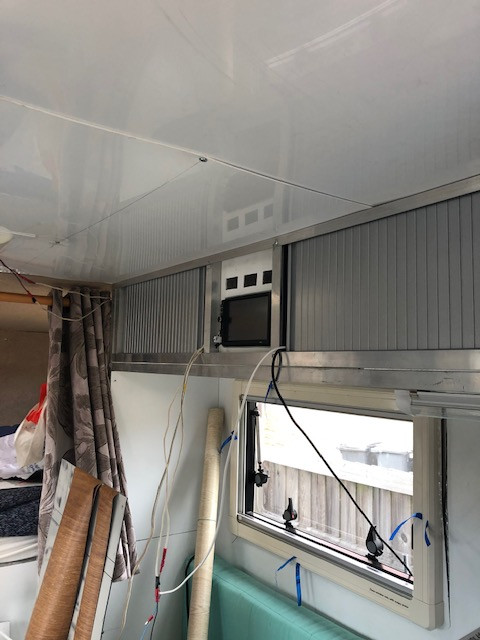 There is a led strip over the door which work from its own switch just inside the door. I intend a cover over the top of the porch light as it is a bit bright at the minute being omidirectional. I think it would wake the neighbours up. I might look into a motion detect sensor to switch it on automatically 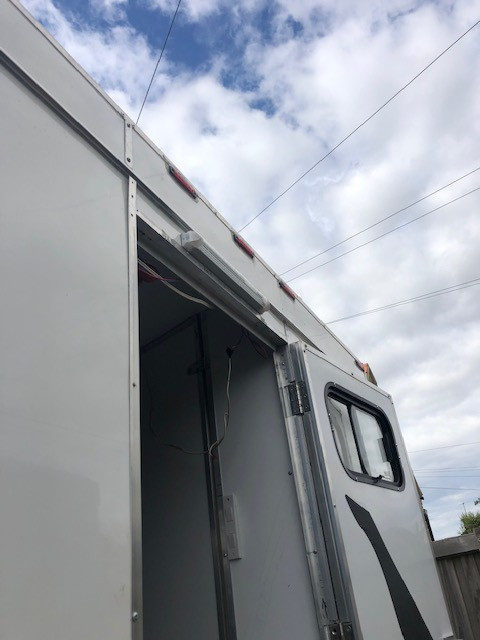 I have (handy) a 12v PIR sensor if you'd like to stop by sometime, you're welcome to it free as I never did get around to
integrating it,
about size of matchbox with motion sense dome on front and terminals to feed/supply.

On the angling PV panels I too wondered if it was practical to do that but;
will I remember or be able to park with it facing south & will I move off without it being secured

Zildjain, that would be most acceptable. I would love to pop over one weekend to fetch it. At the minute my truck needs a good clear out as I think I have an injector not firing correctly and a longer run might burn off the crud.

From what I have seen and read about tilting solar panels it could mean an extra 30% output, particularly in the winter months when the sun is so low. I am hoping to use the camper most weekends all year round when I have it as I want. It does concern me that I might leave it up and move off.
I have decamped and left the jockey wheel down on my teardrop trailer. Set off trailing the water waste pipe, not secured the water container door and even demounted the camper and drove off not disconnecting the power sockets. That one became obvious when the reversing camera screen went blank, luckily before the 12s was at full stretch.
I now have a flight checklist sign that I stand in front of the speedo as a reminder to go through before moving off.
"Success consists of going from failure to failure without loss of enthusiasm" .......(Winston Churchill)

OK sure, in the event we are out/social distancing I'll leave it beneath camper in a bag or box, just help yourself I'd be interested to see how you find it, it looks pretty straightforward to fit

Cheers Zildjian, I will be over Saturday morning.

I started with the best of intentions this morning but the promise of a hot day prompted me to fetch the awning pieces out again. Each time they come out I make small modifications to get them to go up how I want although there was a slight problem in as much the exterior light cover I had stuck on was in the way and had to be moved. Perhaps a good thing if I am to fit Zildjian's movement sensor.

After putting the awning sheets up I decided it was too hot to do anything. Well I did screw a couple of pole supports on for the door shade. 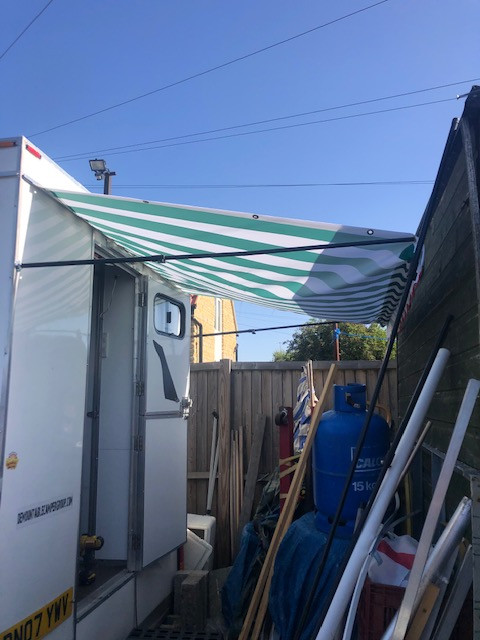 I put the other two sheets up just to confirm where the corner sail will fit when I have completed it. 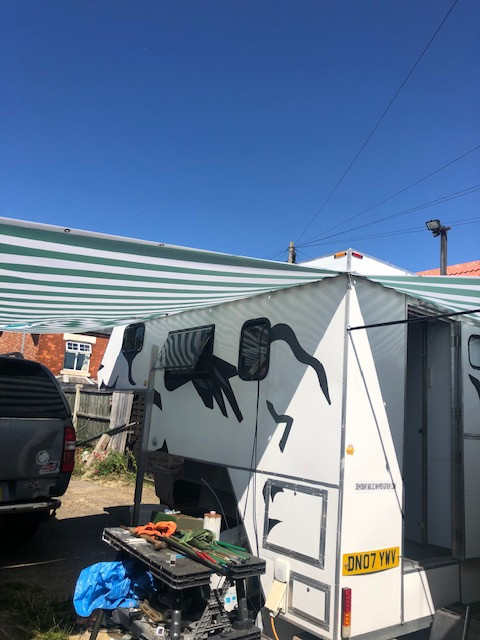 I might be at tyre fitters still but there's a box beneath front of camper, help yourself.

So are you planning a further panel to link those two up then? I like those they look good, you're right it was wayyyy too hot today for anything like that
Also see; http://truck-campers.uk/
& https://www.pinterest.co.uk/RichardZildjian/
Top

Yes, I am trying to link them together with a triangular corner piece. When camping I do most of my cooking on a Cadac. It plugs into the camper gas supply at the back left corner so I am looking to be able to still cook outside come rain or shine. As it is a homemade awning and I have not been able to put it up "properly" I'm not sure how it will stand up to wind and rain. We shall see.
"Success consists of going from failure to failure without loss of enthusiasm" .......(Winston Churchill)